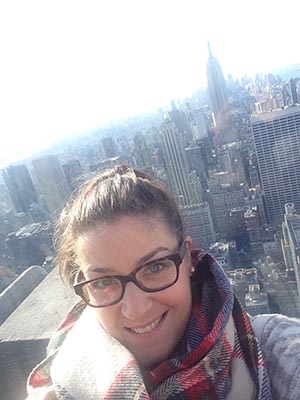 Before her career in the travel industry, Ashley graduated with honours from Humber College’s public relations program and completed a bachelor’s degree in Media Studies at the University of Guelph. She subsequently worked for several years as a successful publicist for arts, culture, and entertainment clients in Toronto.
Lifelong passions for travel and creative writing converged when she joined the Baxter Media team almost seven years ago. As a member of the marketing department, Ashley manages special events and projects, creates marketing plans and collateral, and writes newsletters, website copy, content marketing pieces, and press materials. Ashley is also an occasional member of the editorial team, and has the privilege of travelling to far-off places and contributing to the magazines. 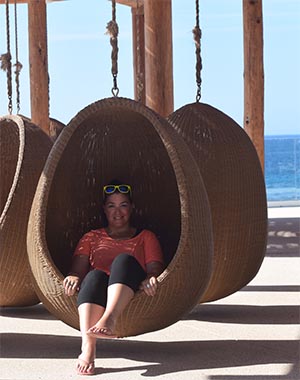 My country count is 15, nowhere near as impressive as my colleagues. However, I have been to every Canadian province, lived in 4 of those provinces, travelled to 10 American states, participated in two student exchange programs, backpacked Europe solo, and visited 33 major cities. So, I’m not a total novice.

Now hiring
Addressing Canada’s tourism sector labour gap
If you haven’t heard – or seen the “apply within” signs – there is an imminent labour shortage across Canada’s tourism sector. Tourism HR Canada estimates that by 2035 nearly a quarter of a million jobs will go unfilled, resulting in a projected revenue loss of $27.4B for the tourism sector. Travel Courier gets to the bottom of this issue with Charlotte Bell, President & CEO of the Tourism Industry Association of Canada, to find out what exactly the labour gap means for Canada’s tourism industry… Read >>

Unique tourism careers taking shape
For too long, jobs in travel and tourism have been thought of only as low wage, seasonal, frontline, and temporary. But tourism has an infinite variety of incredible career paths. The Tourism Industry Association of Ontario (TIAO) is spreading the word on the interesting, fulfilling, and diverse careers tourism has to offer. Meet four inspiring leaders of industry and learn how they got to where they are now….. Read >>

Kimpton Saint George
A downtown vibe done right makes it Toronto’s hidden gem
As with all Kimpton properties, the staff and management work hard to make guests feel at home. And the Saint George in Toronto, Kimpton’s first property in Canada and third outside the US, is no exception… Read >>

Love at first sight
Paradisus takes the guess work out of finding the perfect resort with a pre-wedding package
Some people spend entire lifetimes dreaming of their perfect day. So it can be a huge leap to book a lavish destination wedding based on a single glossy brochure. Paradisus, Meliá’s luxury brand with nine all-inclusive resorts across the Caribbean and Mexico, is giving couples the confidence to book with their Love At First Sight package… Read >>

Royal Service gets royal overhaul at Paradisus Cancun
Troubling tales of unsafe shores and warnings to would-be travellers have been flooding recent newscasts about Cancun, Mexico. But on the ground, it’s a different story. The people are just as warm and welcoming as ever, the weather just as beautiful, food just as delicious, and resorts just as popular. In fact, hoteliers in Cancun are expecting record-breaking occupancy rates of 85% in 2018, marking a steady incline from 80% just two years ago… Read >>

Comeback Kids
After Hurricane Irma, Beaches Turks & Caicos  isn’t just back, it’s better than ever.
Leading up to Hurricane Irma’s landfall on Sept. 7, 2017, staff and remaining guests at Beaches Turks & Caicos Resort Villages & Spa braced for the worst storm to hit the island chain in recorded history. Daily meetings became hourly briefings of the latest weather reports, reminders of safety precautions, and the dos and don’ts of hurricane protocol… Read >>

St. John’s will steal your heart
Perched over the Atlantic Ocean, atop a ragged and rocky terrain, lies North America’s oldest and most easterly city. St. John’s is surprisingly sprawling. With a population of just over 205,000 spread over 446 square kilometres (comparatively, Toronto has three million people in 630 square kilometres), it feels more like a small town than the province’s largest metropolis. Even in the height of summer, it’s impossible to escape the winds of the North Atlantic, and carrying a light jacket is always recommended… Read >>

Cayman Brac
A place so wild and pretty
As the plane touches down at Owen Roberts International Airport in George Town, a nearby passenger prepares to disembark while excitedly telling her seatmate that this is her family’s third trip to Grand Cayman… Read >>

New projects redefining Caribbean experience
Making it new in the Caymans
When hotel brand, Kimpton, opened its Seafire Resort & Spa on the shores of Grand Cayman’s famed Seven Mile Beach in November 2016, it marked the start of a chain reaction of revitalization and development projects across the island… Read >>

The future of Canada’s travel industry is here
… and it couldn’t be brighter!
School’s out and the industry is preparing to welcome the next generation of travel industry leaders. In its second year, Baxter Travel Media’s Baxter Student Ambassador Program (BSAP) has continued its commitment of identifying the industry’s most promising student talent in tourism and hospitality programs at Canada’s leading colleges and universities… Read >>

Meet Bryannah
Last May, Bryannah Day, was named one of six winners in the Baxter Student Ambassador Program, the only travel and tourism student mentoring program of its kind in Canada. Unsure of how she would adjust to new surroundings thousands of kilometres away from home, she boarded a plane bound for Saint Lucia in the fall for her BSAP internship and hasn’t looked back… Read >>

Old world Italy in the heart of the Bahamas
This historic mansion, set among lush private grounds, was originally built in 1740 by Captain John Howard Graysmith, a real-life pirate of the Caribbean. With a long list of famous, and infamous, owners and proprietors, Graycliff has served as both an inn and private residence throughout its 277-year history… Read >>

Meet Aminah
A GRADUATE OF RYERSON UNIVERSITY’S HOSPITALITY & TOURISM MANAGEMENT PROGRAM, last May she was named one of six winners of the Baxter Student Ambassador Program, the only travel and tourism student mentoring program of its kind in Canada. After the program concluded and the school year ended, Aminah didn’t waste any time before landing her dream job in travel as a Sales Consultant … Read >>