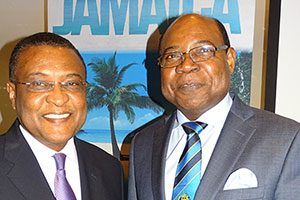 Jamaica’s most senior tourism officials are visiting Canada with the goal of reversing a 6% decline in visitations from this country to the island nation in 2016, reports Press Today’s Michael Baginski.

The government and its tourism ministry has launched an ambitious plan to boost total arrivals 5% in each of the next five years with a target of reaching a total of five million visitors spending $5 billion dollars during that time.

Bartlett (photo, right), tourism director Paul Pennicook (photo, left) and chairman of the Jamaica Tourist Board John Lynch unveiled the “5 by 5 by 5” plan at a trade dinner at the Toronto airport Sheraton last night (Tuesday), with the minister explaining that the delegation, along with JTB Canadian director Philip Rose, were meeting over two days with partners, including tour operators, hoteliers, airlines and travel agents, to both seek answers on how to reverse the decline and to provide answers on how they could help.

But with an assertive tone, Bartlett stated, “Has the Canadian market wilted? Twenty million Canadians are still travelling to the four corners of the world, why are they not coming to Jamaica? We’ve heard all the answers and, tonight, the official word is, we have not accepted the answers! We are starting all over.”

The 5 by 5 by 5 plan is predicated on five pillars of growth: new markets, investments, products, partnerships, and renewal of human capital, supported by five underpinning pillars — food, music, shopping, health and wellness, and love, all based on marketing research of consumer wants and associations with Jamaica.

And he promised the JTB would be there to help the trade “convert lookers into bookers, put feet in the streets, and put heads in beds.”

One priority will be more fam trips for travel agents hosted by the JTB, designed to reacquaint travel sellers with the island.

“Let us take Canada to higher heights,” Bartlett said, “and grow it like it never did before!”