2015 A Record Year for Toronto Tourism 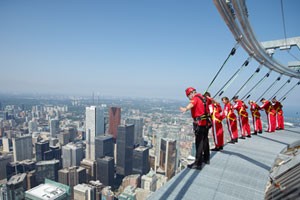 For the sixth consecutive year, tourism in Toronto increased in 2015 as Canada’s largest city welcomed a record 14.03 million overnight visitors.

According to Tourism Toronto, a further 26 million people travelled to Toronto for day trips, totalling 40.4 million visitors for the year in Canada’s most-visited destination. Visitors to Toronto spent $7.2 billion during their trips, the highest amount of economic activity the sector has ever generated.

Toronto surpassed four million international visitors for the first time in 2015 as American and overseas travellers continued to visit in greater numbers. Overnight visitors from the US increased for the fifth consecutive year to 2.48 million and produced direct spending in Toronto of $1.32 billion. Overseas travellers, led by China and the U.K., numbered a record 1.75 million and spent $1.49 billion.

“Every day there are 110,000 visitors in our destination – 38,000 of them staying in a hotel. On average there are 6,800 American travellers and a further 4,800 visitors from other countries in Toronto every single day, and that speaks to the growing appeal of Toronto on a global scale. It also speaks to the hard work our team and our partners do selling and marketing Toronto in key world markets and the results those efforts are producing.”

While visits to Toronto by Americans have increased every year since 2010, the 10% growth in 2015 is the strongest year-over-year improvement yet. Arrivals by air have driven the growth in US travel to Toronto and now account for 65% of all trips by Americans to Toronto. In 2015 both air and land crossings surged, resulting in a record number of American visits. Tourism Toronto has intensified marketing efforts in the US, including the new Toronto Stopover program for Americans flying overseas via Air Canada, and expanded marketing partnerships with national and provincial partners.