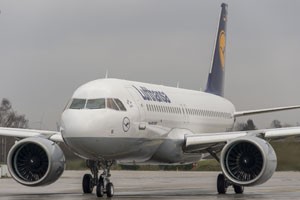 Lufthansa, Airbus and Pratt & Whitney were celebrating the delivery of the first A320neo in Hamburg, Germany recently. The A320neo offers better fuel efficiency and more passenger comfort through quieter engines.

Carsten Spohr, chairman of the Board and CEO of the Lufthansa Group, Airbus president and CEO Fabrice Brégier and the president of Pratt & Whitney, Robert Leduc welcomed 700 guests to the official delivery at Hamburg-Finkenwerder Airport.

Following the ceremonial handover, the first two new-type aircraft were presented to the public. The first A320neo, with the registration D-AINA, has already flown scheduled service since January. The second “neo” is expected to complement the Lufthansa Airbus fleet soon.

The first experiences with the A320neo clearly show that the 15% lower fuel consumption mark has not only been achieved, but even slightly exceeded. The significantly quieter engines also increase customer comfort on-board and provide relief to residents near airports by reducing noise emissions.

The development and introduction of the quietest and most fuel-efficient aircraft on short and medium distances is further evidence of the successful cooperation in the aviation industry at the European level.

Lufthansa’s Spohr commented: “Europe has been a leader in this fascinating industry since the early days of aviation. Lufthansa and Airbus have developed a trusting and productive 40-year partnership. Together we have pushed ahead and brought to market many innovations and contributed to the success of the European aerospace industry. With new and efficient aircraft, such as the A320neo and the A350 XWB, we set new standards for our passengers, while reducing the impact on the environment and, not least of all, on the people living near airports.”