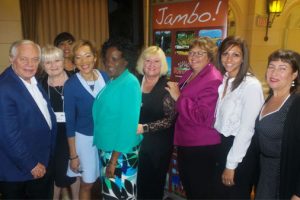 The deputy head of mission at the Kenya High Commission in Ottawa says political unrest in Kenya shouldn’t dissuade tourists from visiting a country that she states is the ultimate destination for those interested in wildlife.

Jane Onsongo told a Toronto audience Friday that this is a “very important time” in her homeland, which this summer saw an election that many Kenyans charged was rigged. The election result led to sometimes violent clashes between police and demonstrators. Kenya’s supreme court recently overturned the election results and ordered new elections, which will be held Oct. 17.

“We want to assure our partners that there is no cause for alarm,” Onsongo told the Toronto gathering.

Tourism provides Kenya’s second largest source of revenue, and Onsongo praised its “wide range” of tourist attractions, which included not only wildlife, but “amazing scenery” found in what she labelled “the world’s best safari destination.”

Susan Webb of VoX, which represents Kenya in Canada, said that 15% of Kenya’s budget is now spent on security and tourism police are now in place in Nairobi and the Indian Ocean Island of Mombasa, a prime tourist spot.

Webb added that Kenya’s national parks, game reserves and heritage sites “have never had advisories” applied to them, with Webb – who’s visited Kenya – adding that it “is a very safe destination.”

Webb noted that chain hotels were rare in Kenya five years ago, but are now commonplace, citing that as proof of an improving tourism infrastructure.

Flamboyant British tycoon Richard Branson has a Kenya lodge and an Italian-funded resort in coastal Malindi has staff that speak Italian. “You can have the best pizza in the world sitting on the beach in Malindi,” Webb stated.

Webb said that running enthusiasts can train in camps that have elite Kenyan runners providing instruction. “You can see where champions train.”

Pictured at the Kenya event are David Pierce and Milka Cook of Collacutt Travel, Jackie Bishop Martin of Journey the Globe, Christine James of TL Network, Osongo, Webb, Chris Lackstrom of the Ensemble Travel Group, Raina Williams of Expedia, and Penny Martin of The Travel Agent Next Door.