Home › Airlines › A Flying Start With The Sunwing Foundation

A Flying Start With The Sunwing Foundation 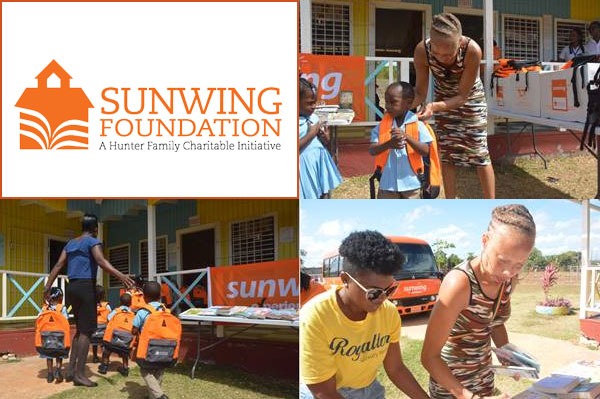 The backpacks were delivered to schoolchildren across the Caribbean island, including students at Hastings Infant School, Kinloss Basic School and Salt Marsh Infant School. A donation was also made to the students at Spicy Hill Early Childhood Institution in Trelawny, a school constructed and funded by the Sunwing Foundation in partnership with Helping Hands Jamaica & Food for the Poor Canada in 2015.

Kingston-born, Toronto-based supermodel Stacey McKenzie – best known as runway coach on America’s Next Top Model – worked alongside the Sunwing Foundation to hand-deliver the backpacks to the students of Spicy Hill.

McKenzie said: “It was so important for me to support my country, the Jamaica that made me who I am today. I always said that if I made a name for myself, I would give back. Being able to get involved physically, as well as meet the kids brought back memories of growing up here.

The Jamaica school donation was the second to take place following the launch of the Flying Start program.

The first, made in partnership with emergency response charity, GlobalMedic, sent 43 boxes of school supplies and donated reading books to the island of Barbuda in late March. The donation assisted more than 400 local school children at the only elementary and secondary school on the island of Barbuda, which was impacted by Hurricane Irma in September 2017.

Stephen Hunter, CEO of Sunwing Travel Group, commented: “The Sunwing Foundation has always been committed to support the youth and education projects in the destinations we serve. Since launching Flying Start not even two months ago, weve been pleased with the support from our employees and partners and are proud to be making a difference.

For more on the Flying Start program, go to www.sunwingfoundation.com .