Edith Baxter In Her Own Words 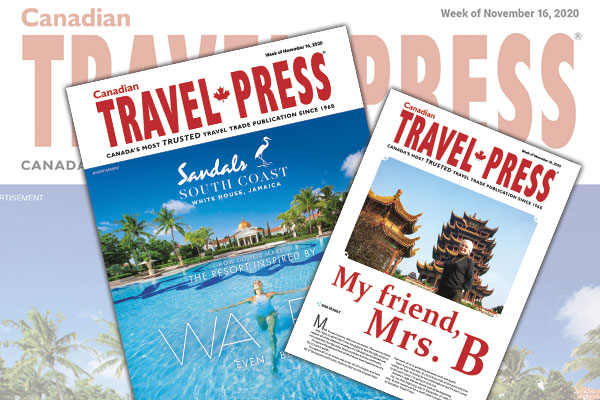 In 2013, Baxter Media published Voices of Travel: Stories from the pages of Canadian Travel Press to mark the magazine’s 45th anniversary.

More than 40 icons of Canada’s travel industry offered their reflections and observations.

One of the many highlights of the first book to trace the history of Canada’s travel trade was a rare interview with CTP’s Editor-In-Chief, Edith Baxter.

The story she had to tell revealed the secret of the magazine’s remarkable success over more than – at the time – four and a half decades.

At one point during the interview, Mrs. B was asked about the biggest change she’d seen in the industry during her time as CTP’s editor-in-chief.

She responded: “I think the big change has been the arrival of the Internet. The world has become more impersonal. It has lost most of its friendliness. People are so busy that they don’t have time to answer your questions, they just tell you to Google it.”

Before she continued: “But, CTP will continue to bring you the news, analysis, destination information, and more – all of the things you expect from us and we will never tell our readers to Google it.”

On November 3, 2020, Edith Baxter passed away at her home in Toronto, surrounded by her family.

In her memory, it seemed appropriate to reprint the interview and let her tell the story of Canadian Travel Press and Baxter Media in her own words.

So, read on, and listen to one of Canada’s iconic voices of travel in this week’s issue of CANADIAN TRAVEL PRESS.

Posted in News, Voices of Travel, Women in travel
Categories