Home › Airlines › A Year Of Contrasts

A Year Of Contrasts 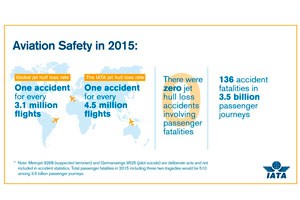 IATA has released data for the 2015 safety performance of the commercial airline industry.

There were four accidents resulting in passenger fatalities in 2015, all of which involved turboprop aircraft, with 136 fatalities.

The loss of Germanwings 9525 (pilot suicide) and Metrojet 9268 (suspected terrorism) that resulted in the deaths of 374 passengers and crew are tragedies that occurred in 2015.

They are not, however, included in the accident statistics as they are classified as deliberate acts of unlawful interference.

IATA’s director general and CEO, Tony Tyler commented: “2015 was another year of contrasts when it comes to aviation’s safety performance. In terms of the number of fatal accidents, it was an extraordinarily safe year. And the long-term trend data show us that flying is getting even safer.”

However, Tyler continued: “Yet we were all shocked and horrified by two deliberate acts – the destruction of Germanwings 9525 and Metrojet 9268. While there are no easy solutions to the mental health and security issues that were exposed in these tragedies, aviation continues to work to minimize the risk that such events will happen again.”