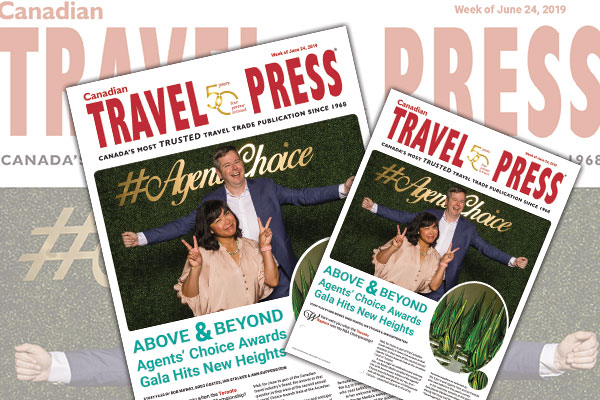 Where were you when the Toronto Raptors won the NBA Championship?

Well, for close to 400 of the Canadian travel industry’s finest, the answer to that question is they were at the second annual Agents’ Choice Awards Gala at the Arcadian Court in Toronto.

It was a night of celebration and anticipation as Baxter Media unveiled the results of the 20th Anniversary edition of the Agents’ Choice Awards Readership Survey, and – with all the glitz and glamour of Hollywood’s Oscars – presented awards to the 2019 favourite suppliers as selected by the 6,512 travel agents from across Canada who cast ballots in this year’s survey.

In her welcome remarks at this year’s Gala, Baxter Media’s executive vice-president, Wendy McClung told the audience that: “Travel agents have been our constant and have always played a vital role. They are the front line sellers, the face of your company to their clients. There are no better advocates for the professionalism of this industry than our hard working travel agents.”

Bob Mowat, executive editor for Baxter Media, explained that: “Over the course of 20 years, one of the things that we’ve discovered is that suppliers who build their businesses in ways that make things better for travel agents are the ones who’ve become the perennial favourites of the agency community.”

And he continued: “I believe that speaks to how this industry has changed and matured since the late 1990s [when Agents’ Choice was launched]. Agents and suppliers have found common ground. They have recognized that they are stronger together than apart, and while disagreements may arise from time to time, working as partners will always be the better way.”

For the full story — and loads of photos — check out this week’s digital edition of Canadian Travel Press.