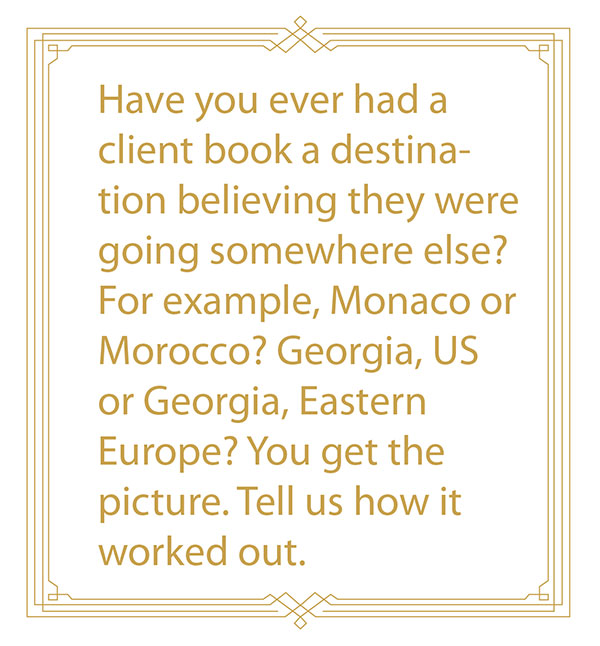 Had booked themselves via online tools to Saint John NB instead of St Johns Nfld. Realized only on the actual flight, called us from in-flight and arranged a connection and exchanged ticket
– Diane Cloutier QC, American EXpress Global Business Travel

I have heard of a passengers that booked Sidney instead of Sydney.
– Bernadette Russell BC, Bains Travel Service

Client booked her own flights to Maui she thought but booked another Island instead
– Fraudelle Glaser ON, Carlson Wagonlit

yes believing they were going to London England and instead they booked London Ontario they booked it online
– Tom Bellamy SK, Carlson Wagonlit Richert Travel

Yes! We had a client book an airline ticket to Antigua the island. Later they realised they were meant to be going to Antigua, the city (Guatemala)
– Kirrily Miller MB, Charleswood Travel

I had clients who wanted to go to St.John’s but came is and said St.John, one in NFLD and one is NB. I booked the wrong destination, but we did catch it soon enough and were able to change it! Best case scenario.
– Amber Kelly AB, Crossroad Travel

San Jose. They got to California instead of Mexico. Should have come to me for their air. Drove sales into the agency because they realized they needed help of a professional.
– Sarah Kostiw BC, Expedia Cruiseshipcenters

Many years ago, they landed in East Germany rather than west???…yikes..contacted tour operator with a great deal of help..
– Gloria Meeder BC, Expedia Cruiseshipcenters.com

yes, I had a client book a flight on their own to London Ontario instead of London England, it was only because I followed up and they said they found cheaper than what I had quoted that I figured it out! I helped them cancel/rebook the correct flight
– april caldwell BC, flight centre

Only booked the wrong hotel within the same city due to confusing almost duplicate names.
– Mike McFadgen BC, Flight Centre West Georgia

I personally have never had a client think that they were going somewhere when they were actually going somewhere else, however we do get a lot of confusion between Saint John, where we are based, and St. John’s in Newfoundland which can make flights tricky sometimes.
– Lina Netznik NB, Freedom Tours and Travel

When I first started in the business I didn’t realize that there was a Panama City, Panama and a Panama City, Florida. Thankfully I didn’t ticket the BSP ticket.
– Jo Ann Wrobel ON, Kemp Travel Group

Originally I had a client looking to only book Portugal for a month. I ended up convincing them todo a romantic tour of Italy and then a few days in Monaco before going then to Portugal. They had the best trip of their lives, the transportation, tours and accommodations were amazing and they were so happy I convinced them todo it.
– Lauren Martin ON, Let’s go travel

I never personally but when I worked in St. John’s, Newfoundland, we had a man get off a Continental flight and thought he was in Saint John New Brunswick!
– Natasha Byrne NS, Maritime Travel

Yes, Daytona Beach….she ended up in Dayton Ohio…bit of a mess but it all worked out. We got her where she really needed to be in the end!
– Susan Doherty ON, Maritime Travel

Kingston, Ontario & Kingston, Jamaica. Thought they were going to a great resort on the edge of Lake Ontario!
– Sue Archer BC, Marlin Travel

Had a client pay for an Eastern Caribbean cruise and they thought they were going to Panama!! They were ok with it because it was such a great price – they didn’t care in the end –
– Heather McLean AB, Marlin Travel Camrose

Yes. A corporate client got on the wrong plane: went to Springfield, Illinois instead of Springfield,Massachusetts
– Diane Lemire ON, Marlin Travel – The Travel Centre

Booked IAH instead of HOU. booked DCA instead of IAD. but this was decades ago.
– Nestor Sumulong ON, new wave travel

I had a client that thought Atlantic City and Atlanta were the same place. Thank goodness we got that sorted out before I issued the airline tickets.
– Julie Evans AB, Newwest Travel

Columbus OH vs Columbus GA. Unfortunately they didnt get their money back.
– Rebecca (Becky) White ON, Niagara Falls Tourism

yes, once a clients wanted Naples so I had them booked and they freaked out about the price , I explained it was a long flight ect ect, and they said what are you talking about its maybe 3 hours !!! They wanted Naples Florida
– Laurraine Payne ON, Northstar TRavel

I accidentally booked a flight to Charleston SC, instead of Charleston WV. Flight got refunded thank goodness
– Hannah Beads BC, Odenza Marketing Group

Yeap, a lot of Africa and middle East.
– Misheel Enkhtuya BC, Odenza Vacations

We get a lot of people searching wrong airports such as St. John, New Brunswick instead of St. John’s, Newfoundland Labrador
– Leanne Rowsell NL, Sell Off Vacations

Clients who book online for Panama City Florida but wanted to go to Panama (the country)
– Kristina Lianne Mifsud ON, SELLOFFVACATIONS

YES!!! Booked a car in Portland Oregon and should have been Portland Maine
– Bill MacDonald AB, St Albert Cruiseshipcenters

I booked them to go to San Jose Costa Rica instead of Del Cabo San Jose Mexico…..I had to cancel and rebook the ticket.
– Christine Elliott BC, Sunsational Vacations – The Travel Agent Next Door

A client once booked a car rental in Granada thinking it was in Grenada. (She did this herself!!!)
– Julie Gilchrist ON, The Travel Agent Next Door

Palma and Las Palmas.She was an idiot but few months later her ex husband appeared in the office and thanked us for losing his wife !!!He became a client for years,lived in Crypus and came here twice a year,
– Sybil Narine QC, time travel

Yes the wrong airport in the Bahamas – was able to change it to make it work
– Leanne Unger MB, TPI Travel

booked someone to South America instead of Los Cabos! wow
– Linda Josimovic ON, Transat Travel Markville

had clients book Mazatlan instead of Cancun, they were upset but still went and enjoyed!
– Cheryl Read AB, Transat Travel Sunridge Mall

Almost did the codes for Jacsonville Florida Geneva and Goa are similar…I caught it in time.
– Marie de Lotbiniere Harwood QC, TravelOnly

yes, St Johns Nfld and they ended up in St Johns NB
– Louanne Fradsham ON, uniglobe

booked them to pty instead of ecp when i first started as an agent as i didn’t know there there was a panama city in florida (fail)
– Barbi Sykes AB, uniglobe one travel

over and over: Sydney Australia instead of Sidney NS or Sidney BC
– Kenneth Blaschuk BC, Vision Travel Solutions

Yes, clients on a CroisiEurope Cruise. Thought they had a stop in Vienna Austria. But the stop was in Vienne, the one in France
– Melany Tremblay QC, voyages fontainebleau

Client asked to book a specific hotel package in Cuba to travel with friends who had booked with another travel agency. I advised them that hotel package was to Mexico.Their friends had been booked to the wrong country. I booked my clients to Cuba and their friends changed their booking to Cuba as well.
– beverley oreilly ON, wings & waves travel services inc.