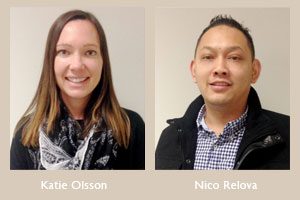 Air Canada Vacations (ACV) has appointed Katie Olsson and Nico Relova as its new area sales managers in the West.

Olsson will cover Vancouver West and the downtown region, Vancouver Island, Northern BC, Richmond, Ladner, the North Shore and the Yukon. She has 10 years of experience in the travel industry and most recently held the position of director, industry sales, Intrepid Travel. Olsson can be reached at kolsson@vacv.com.

Relova will cover the regions of Vancouver East, Burnaby, New West, Surrey, Delta, Fraser Valley, the Tri-Cities and the Okanagan. He has 12 of years of experience in the industry, most recently working at Transat Holidays in the call centre, revenue management and group sales. He can be reached at nrelova@vacv.com.