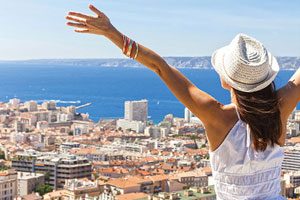 Air Canada Vacations (ACV) has unveiled several new itineraries that will be featured in its upcoming Europe and Cruise brochure.

New programs for Scotland, England and France have been added and segmented into the categories of Urban Getaways, Guided Tours, Fly & Drive and Fly & Rail Vacations and French Riviera Escape.

In Scotland, the Urban Getaways + program offers travellers the option to discover capital Edinburgh at their own pace and includes a hop-on/hop-off bus tour with stops in historical neighbourhoods and tours of Loch Lomond National Park and several whisky distilleries.

In England, Fly and Rail options allow travellers to not only explore the UK, but also journey into surrounding countries including France. The London & Paris itinerary includes a panoramic sightseeing tour of London, followed by transportation aboard the Eurostar train to Paris. There, travellers will enjoy a boat cruise up the Seine and soak up Paris’ food, culture, and art and fashion scene.

ACV’s extended program in France complements Air Canada’s upcoming route from Montreal to Marseille set to launch in June.
When travellers book any pre-bundled air-inclusive package to Europe by March 31, they will save $300 per couple, $150 per adult, receive a reduced deposit and free seat selection, and earn 4,000 Bonus Aeroplan Miles – 10,000 extra miles on Ireland packages.

The promotion is also applicable to Europe air and cruise bookings.
ACV is also offering a discount coupon of an additional $100 off when clients book a European package with a travel agent – for a total of $400 in savings. (http://bit.ly/2mJWEo2)

Featured Europe cruise promotions include ACV’s CruiseAir BOGO sale which offers 50% off the airfare for the second passenger on all air and cruise bookings.

Norwegian’s Canadian at Par offer applies to select 2017 European cruises onboard the Norwegian Epic, Norwegian Getaway, Norwegian Jade, Norwegian Spirit and Norwegian Star; MSC’s 2-for-1 rates include 50% savings on the second passenger plus a reduced deposits of $70 per person – kids also sail free on select sailing. And, with Royal Caribbean, clients will receive 30% in savings. All of the above cruise promotions end March 31.