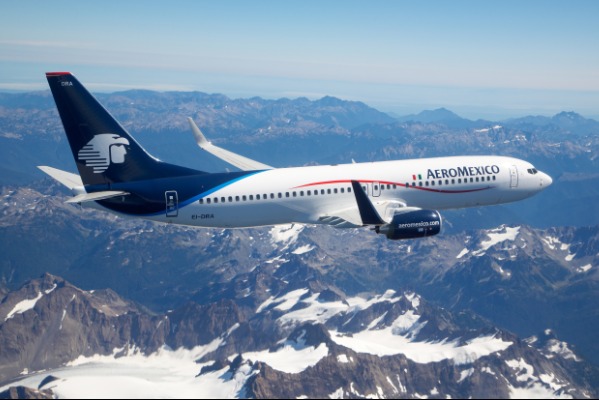 As part of the International Day of Climate Action, Aeromexico will be operating its first flights between the U.S. and Mexico with sustainable aviation fuel (SAF), reducing 27 tons of CO2 emissions, equivalent to making more than 3,800 cars zero emission for one day in Mexico City.

The flights will depart from San Francisco to Guadalajara and Mexico City, and they will be served in a Boeing 737-800 aircraft with GE/Safran CFM56 engines.

For these trips, almost 40,000 litres of sustainable fuel made from waste animal fats and vegetable oils, as well as Jet-A jet fuel, were purchased. As the beginning of a long-term partnership, the supplier was Neste Company, a leading producer and supplier of renewable fuels and one of the world’s most sustainable companies, according to Corporate Knights.

Maria Dolores Paradis, Aeromexico’s sustainable project planning manager, said: “Reducing CO2 emissions is part of our sustainable strategy to combat climate change. For more than a decade, we have had a fuel efficiency program that has reduced around 270,000 tons of CO2, equivalent to the circulation of 105,000 cars per year in Mexico City. Aeromexico’s operations, engineering and optimization teams take care every day of these initiatives that challenge us as a company and as an industry, contributing to a better future for Mexico and the world.”

SAF allows airlines to reduce greenhouse gas emissions by up to 80%, and Aeromexico is a pioneer in its use in Mexico and elsewhere in Latin America. In 2010, several flights operated with sustainable aviation fuel between Mexico and Costa Rica as part of the Green Flights campaign.

In 2011, the first transatlantic flight using SAF was served between Mexico and Madrid, and in 2012 the airline operated a flight to São Paulo for the United Nations Conference on Sustainable Development RIO+20.

These initiatives were possible thanks to the company’s operations engineering team. Aeromexico is one of the most innovative airlines in the market since it continually invests in modern aircraft, equipped with lean-burn combustion technologies and high propulsive efficiency.

As a result, the company has reduced by up to 25% fuel burn. This reinforces the commitment for future SAF operations in collaboration with GE and Safran.

Among other initiatives, the airline has Vuela Verde, a voluntary emissions compensation program through which customers and employees can contribute MXN 90.00, when purchasing their airline tickets, to offset their flight carbon footprint. The proceeds are invested in certified socio-environmental projects.

Aligned with the Sustainable Development Goal 13 Climate Action of the United Nations 2030 Agenda, Aeromexico will continue to implement initiatives to reduce and offset its emissions and pave the way to a greener future.