Aeromexico Takes Off From Calgary 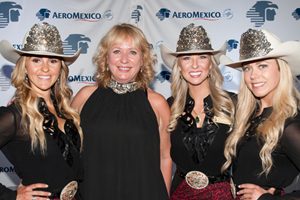 Aeromexico has started service from its fourth Canadian destination – Calgary – to Mexico City.

The new flight is operated with the carrier’s Boeing 737-800 aircraft with 160 seats including 16 in Business Class.

Anko van der Werff, Aeromexico’s chief revenue officer, said of the new service: “The addition of Calgary to our route network in Canada strengthens our presence by providing another travel option to Central Canada. Aeromexico currently serves the four largest cities in Canada, establishing us as one of the best options to travel directly from Mexico City to the province of Alberta while allowing our customers traveling from Canada to connect to Leon (Bajio), Guadalajara, Puerto Vallarta, among the 44 destinations we serve in Mexico.”

He continued: “This destination is known for its growing oil and gas industry, and is ideal for business travelers looking to fly directly to Calgary without having to stop in other cities in Canada. Calgary is also a hub where our codeshare partner WestJet allows us to aggressively expand connectivity options to 35 destinations nationwide.”

In 2011, Aeromexico started to serve the Canadian market with direct service to Montreal, Quebec and in just six years, the carrier has expanded its presence to the country’s Central, Western and Eastern provinces.

In addition, as of June 19 this year, the airline increased service to two daily flights from Mexico City to Montreal, Toronto and Vancouver, for the summer season through August 20, offering more than 9,900 seats per week and more than 60 nonstop flights to all customers traveling to this northernmost country on the North American continent.

Go to http://www.aeromexico.com for more.