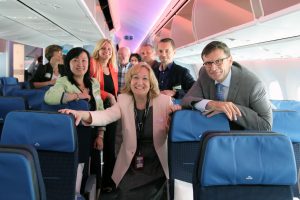 A few days after its inaugural landing in Toronto on July 4, KLM Royal Dutch Airlines welcomed travel agents to get a sneak peek of the cabins of its 294-passenger Boeing 787 Dreamliner.

Larger windows, a higher cabin pressure and special LED-lighting are all part of the Dreamliner flight experience. Wi-Fi is also available for those wanting to stay connected during their flight.

In the KLM tradition of christening its aircraft – city names for B747s; famous places or parks for its B777s – the Dreamliner fleet is named after one of the typical Dutch export: flowers. Carnation, Sunflower, Bougainvillaea, Dahlia, Hibiscus and Mimosa compose the six Dreamliner’s now in its fleet.

This summer, KLM offers double daily flights between Amsterdam and Toronto every day except Thursdays and Saturdays (daily). The Toronto-Amsterdam route is served with the new World Business Class cabin. Eligible clients have access to the newly redesigned Toronto Lounge while others may purchase access for $40.

KLM’s Dreamliner has a capacity of 294 passengers – 30 seats in World Business class; 264 in Economy, of which 48 are in the Economy Comfort zone.

Economy Class seats offer passengers extra comfort. The back of the seat can recline 40% further and all passengers have access to a power socket where they can recharge mobile equipment. The Inflight Entertainment system has been renewed and extended with a larger, 11-inch screen, intuitive HD-quality touchscreens, interactive 3D maps, and the option to communicate via Seat Chat with fellow passengers who are not seated nearby. 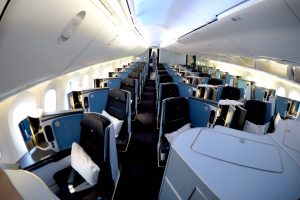