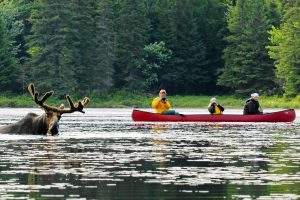 The regular US election-period surge in search engine queries about “moving to Canada” and social media conversations has led Canada’s national carrier to create a digital campaign using humour to increase awareness of Air Canada’s market presence in the United States.

“Just as with past US election campaigns, every four years we see the phenomenon of Americans musing about moving to Canada,” said Selma Filali, director, Global Marketing and Sales Communications at Air Canada. “This time, we thought we would have a little fun in a tongue-in-cheek, creative way using typically understated Canadian humour. We’re basically saying to our neighbours to the south, we’d love to have you over and take a look around; come have a great time with all that Canada has to offer. Of course, we want everyone to get along, so if you buy a return ticket – all the better.”

The digital campaign is targeted to residents of Los Angeles, San Francisco, New York, Boston, and Washington, D.C., and provides light-hearted travel tips and sight-seeing advice for Canadian cities, along with information on Air Canada’s flight schedule serving their city.

As part of the campaign’s digital strategy, Air Canada will be monitoring social media conversations and responding to US residents with personalized messages and targeted videos.
Targeted YouTube Pre-Roll will be promoted in each of the five target US markets, delivering video messaging with contextual and geographical filters across multiple screens (desktop, mobile, tablet). Twitter Promoted Video and Promoted Tweets will leverage social aggregators to capture Tweets mentioning “moving to Canada” and showcase the user generated content (UGC) across digital and social platforms. This will include interactive polling, which will allow US residents to Retweet a video showing a Canadian city similar to their own.