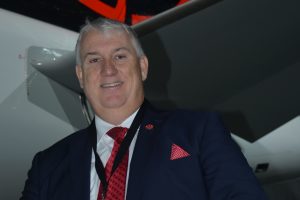 The naming of Air Canada as the winner of Best Airline in North America by Skytrax World Airline Awards was cause for celebration at the airline, but a review of the award by the CBC did not go down well with airline management.

Air Canada has won the title six times in the past eight years, lending even more credence to the celebrations. It was achieved through surveys of almost 20 million air travellers, and the title was unveiled during the 2017 International Paris Air Show.

“This award is a significant milestone in the transformation of Air Canada into one of the world’s leading carriers and is all the more meaningful given the increased competition in our industry,” said Calin Rovinescu, president of Air Canada.

But a story posted by the CBC questioned the credibility of the award, saying that a survey by J.D. Power found that Air Canada ranked near the bottom amongst major North American carriers.
Duncan Bureau (pictured), VP of global sales at Air Canada, responded that,

“But the vast majority of the time we deliver all of the above without incident on the more than 1,500 flights we operate daily, for 42 million passengers per year.”