A Global Champion Ready To Take On All-Comers 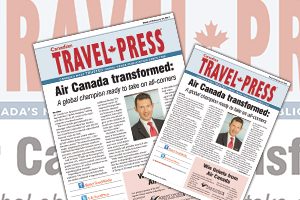 Air Canada is in the process of transforming itself into a “global champion,” willing and able to take on all-comers in the super-competitive worldwide market, reports Montreal editor, Mike Dunbar in this week’s digital edition of Canadian Travel Press.

That was the lofty goal outlined by AC passenger airlines president Ben Smith to the investment community last week after his boss Calin Rovinescu reported unprecedented financial results for 2016.

“We achieved outstanding results, surpassing the previous records for EBITDAR (earnings before interest, taxes, depreciation, amortization and aircraft rent), as well as for passenger and operating revenues.”

And he noted: “Traffic for the year grew by more than 13%, with increases in all five geographic markets and we reached a new record of serving close to 45 million customers on our expanding global network.”

Expanding on the success theme, Smith explained: “Our current and future business model, comprised of improved culture, additional Boeing 787s, our leisure carrier AC rouge and stronger hubs in Toronto, Montreal and Vancouver is highly competitive, better positions us to succeed and gives us the confidence to launch new routes which, in the past, would not have been viable.”

He added: “In 2016, many of the transformational investments we made over the past few years were in full deployment and we were able to successfully and profitably launch 28 new routes. So far, the results from these routes have exceeded our expectations.”

While Smith reported healthy revenue growth in all geographic markets, he noted that the company suffered a system-wide 7.2% yield decline, the bulk of which was the result of flying a 6.5% longer average stage length due to the addition of long-haul routes.