Air North Takes Off From Toronto 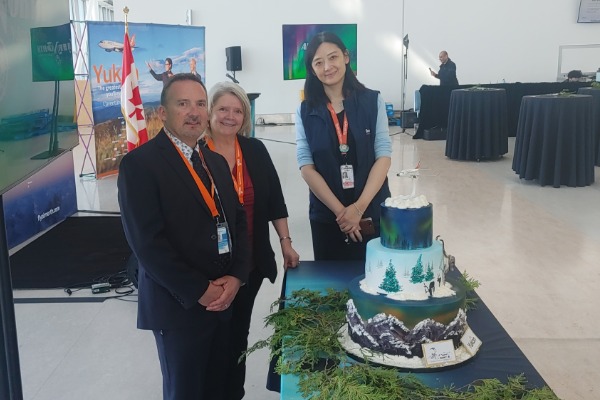 Air North has broadened its presence in the South by providing a direct link between this country’s largest city and the capitals of both the Yukon and the Northwest Territories.

The route was praised by visiting Yukon officials at a reception at Toronto’s Pearson International Airport.

The launch of the route marked a “major milestone,” Silver added.

Silver labelled Air North a “nationally recognized leader in air travel” that “is working every day to provide consistent and reliable service.”

Air North — which bills itself as the Yukon’s airline — serves several Yukon communities, including northernmost Old Crow and the gold rush hub of Dawson City, and also flies to the Arctic Northwest Territories community of Inuvik.

The new route is the first linking Toronto with either Whitehorse or Yellowknife.

The inaugural flight was piloted by company president Joe Sparling

Seen here at the Toronto reception are Air North’s Denis Parry, Heather Watson and Helen Yang, who are posing with cake decorated a caribou and other Northern images