It's Time To Make It About The Destination 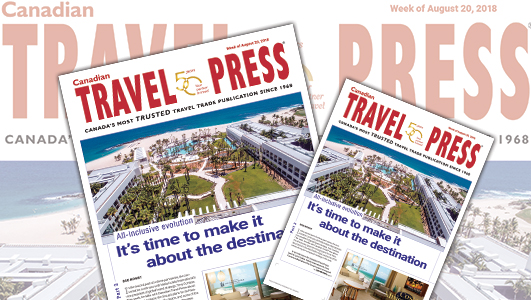 In an interview with Canadian Travel Press back in 2016, Melia Hotels International’s Tony Cortizas talked about the Group’s plans to expand its all-inclusive Paradisus brand into the Asia Pacific region, so it seemed an obvious question to ask whether that was still part of the plan.

“It’s still part of the plan,” he said, adding: “Paradisus is the brand that the agents [here] know the best.”

Cortizas told CTP that although no specific projects are completely confirmed, a deal to do this is confirmed in Thailand, where an agreement is in place to build two new Paradisus properties there.

In the meantime, Cortizas said that MHI is going to be converting some of its Canary Island properties, including Lanzarotte – currently a Melia property.

That property will undergo a major refurbishment and renovation and when it re-opens under the Paradisus brand, it will be the first of its kind in Europe.

And he added: “So we’re going to be careful where we do go and where we don’t go; but the Mediterranean is on the radar; and Southeast Asia for sure is going to be happening — so Indonesia and Thailand and Vietnam.”

Don’t miss the second part of a three-part series with Melia Hotels International’s vice-president of global brand strategy, Tony Cortizas. This week, he talks with Canadian Travel Press about the all-inclusive space; the Group’s plans for its Paradisus brand in the Asia Pacific region; and some of the trends driving the company’s strategy in this area.

Check it out by clicking here.