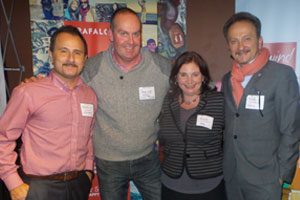 A Trafalgar travel director says he and his colleagues are committed to ensuring that those who go on Trafalgar itineraries won’t simply be seeing more of the same.

“[As] travel directors [we’re] always trying to give you something unique,” Dave Neil told a Nov. 29 Toronto audience.

Neil, who spends much of his time guiding in Britain, said that part of the world provides surprises, with Trafalgar clients able to visit a vineyard in Wales, a part of the world few people associate with wine.

Clients can meet the family running the vineyard and participate in a wine-tasting through Trafalgar’s Be My Guest program.

Neil also praised the Scottish Highlands for having “some of the most beautiful scenery in the world,” suggesting that region is “just as dramatic for scenery” as the Alps.

Both also said whiskey aficionados will be in their element in Scotland, with that country having hundreds of whiskey distilleries, and tourists able to visit the sites that produce a product synonymous with Scotland.

Meanwhile, Paunic said Trafalgar is “expanding its horizons,” noting that India and Sri Lanka have recently been added to the list of countries it offers.

He also said Trafalgar’s Remembrance Program will offer 2017 tours that coincide with the 150th anniversary of Confederation, and deliver clients to battlefields on which Canadian troops played a pivotal role. “The stories are as equally tragic as they are inspiring,” he added.

Seen in the photo are: Trafalgar’s Maurizio Mazzola; Neil; Anita Emilio; and Paunic.