Japan Is In Vogue With Canadians 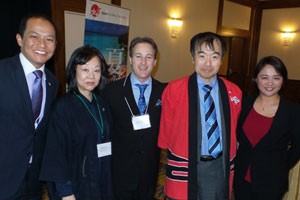 Japan appears to be in vogue with Canadians.

This past January in turn saw an increase of over 25% from January 2015.

“It’s an amazing record and I am truly grateful to all the Canadian travel agents,” Nakazawa said of the 2015 results.

Among reasons he cited for the increases are growing air links between this country and Japan, with All Nippon Airlines last year beginning Vancouver-Tokyo service, its first Canadian route.

But Nakazawa added there’s growing interest among Canadians in Japanese culture, noting the soaring number of Japanese restaurants in Toronto, where he’s based.

Nakazawa conceded that Japan is often seen as an expensive destination, an image he says isn’t necessarily deserved, adding that he spent $100 this year for a hotel room in central Tokyo and had lunch in that city for under $12. The subway system in the Japanese capital charges $2.13 for the first 6 kms, making it an inexpensive way of exploring Tokyo, he continued.

The JNTO is inviting agents to become one of its Japan Travel Specialists, which can be found through the http://www.IloveJapan.ca site.

Meanwhile, Serena Lee of Japan Airlines told the gathering that her carrier was won numerous accolades for the likes of on-time performance and seating and those travelling with it will experience a Japanese ambiance “the moment you’re on board.”

Rocky Lo of Air Canada in turn noted his airline will have 2,700 seats between this country and Japan every day during the peak summer season.