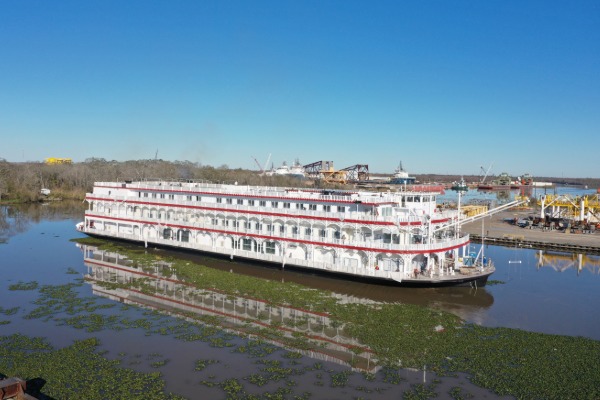 The upcoming ship will be christened in New Orleans on April 4 ahead of its inaugural sailing from New Orleans to Memphis April 5-13. The 245-passenger riverboat will join the American Queen and American Duchess on the Mississippi, Tennessee, Ohio and Cumberland rivers.

On Feb. 19, the American Countess navigated through a section of the Intracoastal waterway in Houma, LA en route to Morgan City, LA as part of an extensive river trial completing several key tests and simulations as part of their Certificate of Inspection, issued by the United States Coast Guard (USCG). Several USCG officials were on board during the trials to monitor progress and witness first-hand the day’s success. The completion of this trial puts the vessel on track for an on time delivery from Gulf Island Shipyard.

The American Countess will transit to New Orleans later this month spending four weeks undergoing finishing touches while at port. Crew members will join the ship to aid in the final preparations while undergoing intense safety and service training prior to the VIP Cruise and Christening taking place March 31 through April 4.

Built using the existing hull of a former gaming vessel, the Kanesville Queen, the American Countess was lengthened by 60 feet and underwent a total renovation in the Gulf Island Shipyard in Houma, L.A. With four decks, including a Sun Deck, and 123 staterooms in four categories, the paddlewheeler will become a home away from home on six- to 15-day itineraries.