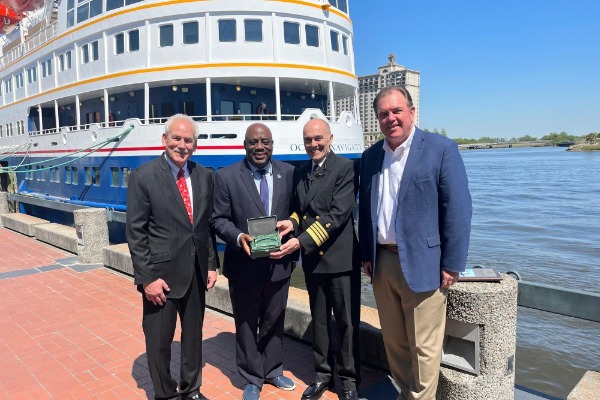 American Queen Voyages is celebrating the return of Ocean Navigator, the final Lakes & Oceans vessel to be added back to the fleet, as it welcomes its first guests in over two years.

The 202-guest boutique coastal ship, a sister to Ocean Voyager, was greeted in downtown Savannah at River Street Market Landing by city leaders and dignitaries, including Mayor Van R. Johnson, who toured the vessel, visiting with crew and officers before an afternoon guest embarkation.

John Waggoner, founder & chairman, American Queen Voyages, said: “The Great America-tion summer is nearing, and travelers are ready to make up for lost time and deeply discover North America now. The return of Ocean Navigator signals yet another opportunity to explore with us beyond the Mississippi River, without the uncertainty and the complexity of international travel.”

The first voyage on Ocean Navigator in over two years will be a 17-day itinerary up the Eastern Seaboard, calling on ports including Charleston, Norfolk, Baltimore, Newport, Nantucket and more, disembarking in Halifax, Nova Scotia. Her sister ship, Ocean Voyager, will begin making her way north towards the Great Lakes after completing a final Southeast U.S.A. sailing from Jacksonville on April 12.

Both Lakes & Oceans vessels arrive in Toronto May 10 and May 12 after exploring the Eastern Seaboard and St. Lawrence Seaway. The first highly-anticipated arrival at Chicago’s Navy Pier will be Ocean Navigator on May 18.

The month of April marks the 10th anniversary of American Queen Voyages and the debut of expedition ship Ocean Victory on May 6, sailing between Vancouver, B.C. and Sitka, AK.

In June, Founder and Chairman, John Waggoner, and Culinary Ambassador, Regina Charboneau, will celebrate the company’s 10th anniversary with four newly added Lower Mississippi River itineraries on the flagship American Queen. The nine-day itineraries will sail between Memphis and New Orleans with departures on June 5, 12, 19 and 26, 2022.

Celebrating the 10th anniversary season, American Queen Voyages Founder and Chairman John Waggoner will join the June 12 American Queen sailing from New Orleans to Memphis to serve as host and special guest Riverlorian. As special guest Riverlorian, Waggoner will host exclusive lectures and share tales on the history of the company, memories from ports along the rivers, the making of the newest paddlewheeler American Countess, and more.