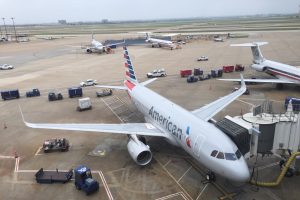 American Airlines has announced a suspension of its Chicago O’Hare service from the Region of Waterloo International Airport, effective Oct. 5.

According to officials, despite efforts to combat the currency issues with increased passenger traffic, Waterloo Region will join a lengthy list of Canadian airports negatively impacted by the low Canadian dollar. Since 2014, airlines based in the US operating in Canada have seen consistent reductions in profit, suspending service on 35 Canadian routes in total, including: Edmonton – New York; Halifax – Washington; Halifax – Chicago; London – Chicago; London – New York; Montreal – Houston; and Ottawa – Chicago. London International Airport is now without regularly scheduled service to the US for the first time in 40 years.

“We want to thank everyone who flew from home and supported American Airlines and want to assure the community we are trying to find a replacement service for our growing community,” said Chris Wood, Airport General Manager at the Region of Waterloo International Airport. “Despite consistent passenger loads, unfortunately American has made a business decision to suspend the route.”