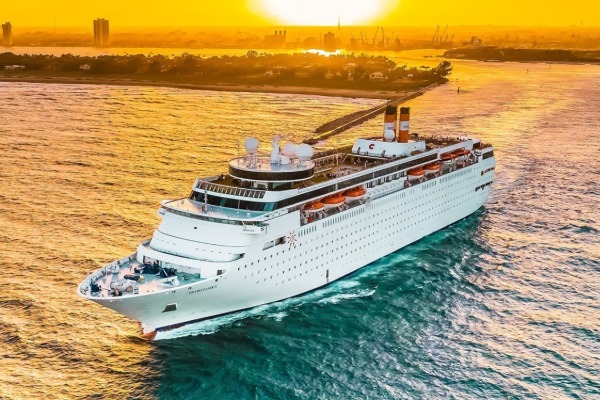 Do you predict a mini cruise in your clients’ future, asks assistant editor, Ann Ruppenstein in the latest issue of Travel Courier Digital.

For its next themed cruise, Bahamas Paradise Cruise Line is sailing away with the star of TLC’s The Psychic Matchmaker and SiriusXM Stars’ Psychic Connection with Deborah Graham.

“We’ve done a pirate’s cruise, which sounds a little bit tongue in cheek, but it’s actually guest speakers that talk about The Treasure Coast off the coast of Florida, where West Palm Beach is,” Francis Riley, SVP of Sales &amp; Marketing at Bahamas Paradise Cruise Line, tells Travel Courier Digital. “That’s where most of the Spanish galleons sunk and there’s even treasure that’s being found over there and we’re just in the throes of creating a new one, which will be a dedication to Blackbeard, which will be going to Nassau where he used to spend a lot of his time back in the day.”

Evidence from another themed cruise can still be found onboard the Grand Celebration.

Its ArtSea cruises feature up and coming and well-known street and graffiti artists, who transform the top deck into an open-air art gallery. Pieces by the likes of The London Police, PEZ and Slomo, are currently displayed on the ship.

“They have a big following and it’s something that’s pretty unique,” he adds. “We have a lot of these types of theme cruises that we promote, which I think gives us a point of difference.”

With the cruise line now available across all Revelex booking platforms and through TravelBrands Cruises, by Encore Cruises, Bahamas Paradise Cruise Line is set to make a bigger splash in the Canadian market.

For the full story, check out this month’s issue of Travel Courier Digital.