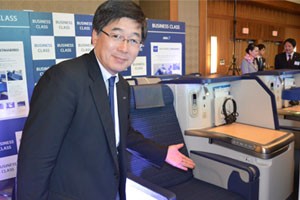 A new Boeing 787 Series 9 will soon start flying between Vancouver and Tokyo in the colours of All Nippon Airways (ANA), helping to confirm the city’s increasing priority as a gateway from Asia to North America.

The ANA B787-9 will kick off flights on the Vancouver-Tokyo Haneda route as of April 28. It will feature newly designed business class suites in the J class cabin.

These feature a roomy, staggered configuration for more space and privacy, and a full 180 degree recline function. The 48 seats in the cabin are aligned so that every passenger has aisle access.

The new aircraft also offers a premium economy cabin option, with 21 seats, for the first time on the route.

Vancouver is just the fifth destination on the ANA map to offer the B787-9, which is essentially an extended version.