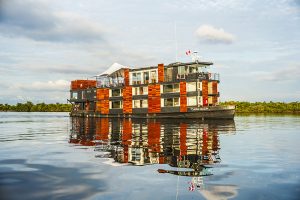 Francesco Galli Zugaro, founder and CEO of Aqua Expeditions, reports that on July 16 the Aqua Amazon suffered a very serious accident and sank.

No passengers were on board, but some crew were hurt and five others have been declared missing.

According to Zugaro, during regular Saturday supplying and turn-around hours for re-stocking of the vessel, an accident occurred that caused an explosion and resulted in the sinking of the ship. No cause is known and an investigation is ongoing.

The incident occurred in the port of Enapu, located along the Itaya River, Punchana district in Iquitos (Loreto).

Passengers scheduled to depart on the Aqua Amazon are being reassigned to the Aria Amazon and other river cruisers.