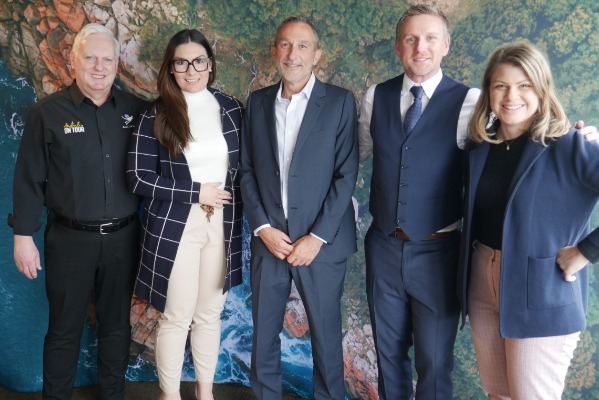 Some of the strictest COVID-19 lockdown measures in the world were recently reduced in Australia, where international tourists – double vaccinated – are once again being welcomed, reports Press Today’s Ted Davis.

The border reopened to visa-holders with vaccination certificates on Feb. 21, marking the end of almost two years of travel barriers to block the spread of the virus that started in March 2020.

A recent travel industry mission to Vancouver made it clear that the country is back in the tourism business. A contingent of Australia travel suppliers and regional reps met media to show off new travel products and striking promotional videos.

Some of those video assets made it onto the streets of Toronto and Vancouver in the winter, where passersby watched video projections of Australia’s landscapes and wildlife on the walls of buildings. Locations with high foot traffic were chosen, including Queen St. West in Toronto and Seymour St. in Vancouver.

These efforts are part of an “elevated investment” in the Canadian market that was green-lighted after surveys determined a strong interest by Canadians to visit Australia.

“We’ve seen a big jump in the perception by Canadians of Australia as a safe destination,” said Allison. He said the surveys of international tourists in general indicate a desire make big travel plans in the wake of the pandemic to achieve bucket list holidays – a good fit for Australia’s tourism profile.

Australia travel plans are being enabled by a growing wave of restored air capacity to the continent, said Allison. About 58% of all international air capacity has been restored to Australia so far, and that is expected to reach between 70% and 80% by the end of the year, he said.

This includes Air Canada, which has announced that its flights to Sydney from Toronto are increasing to a daily frequency as of May 1, and that flights to Brisbane from Vancouver will operate four times per week starting July 1.

Some of the new attractions and hotels are below:

For more, on Australia go to www.tourism.australia.com