Destination Has A Style That's All Its Own 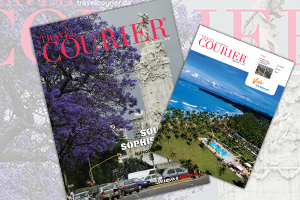 Far below the equator, near the bottom of the world, Argentina summons travellers with a blend of sleek, urban style shaped by a turbulent history and flavoured by renowned wines and cuisine, reports western editor, Ted Davis in this week’s cover story in Travel Courier.

History and style cross paths in Buenos Aires, whose roots reach back to its founding in 1536. It draws comparisons to European establishments with its old world sophistication, while the streetscape retains the more jumbled characteristics of some European cities – it was sometimes known as the Paris of South America.

Contributing to this impression is the city’s stylish architecture – especially in the Recoleta section of the city – and the latest fashions that are on parade as part of day-to-day life. B.A.’s cosmopolitan atmosphere is reinforced by the many intimate side walk cafes that dot the city, signaling a connection to earlier waves of old world immigration.

Today, Buenos Aires has over 70 listed historic cafes known as “bares notables,” recognized for their importance to the city’s culture. These were the meeting places for illustrious literary, musical and political figures such as Jorge Luis Borges and Carlos Gardel. Their interiors are carefully preserved, and the oldest date back to the end of the 1800s.

The cafes are usually open every day for breakfast, lunch snacks and the traditional merienda late afternoon snack. Good examples of cafes include Café Tortoni, El Faro and Confiteria las Violetas, which serve a typical cortado (espresso with a dash of hot milk) and medialuna (croissant). Some cafes even have daily tango shows.

For the full story, dance your way over to this week’s digital edition of Travel Courier.