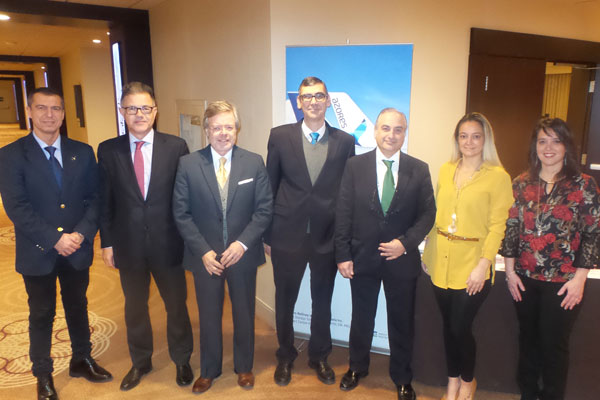 The carrier, which will close out 2019 with four weekly flights between Toronto and the Azores’ Ponta Delgada, will see daily service between the destinations during the peak May-September summer season, a Tuesday Toronto gathering was told.

There will also be Thursday summer service from Montreal to Ponta Delgada.

The June-September period will also see weekly service from Toronto to the island of Terceira.

Toronto flights are now on Monday, Wednesday, Friday and Saturday. Passengers can continue from the Azores to mainland Portugal, with the carrier serving both Lisbon and Porto.

Frankfurt, the Canary Islands and Cape Verde are other destinations.

The carrier has also taken delivery of what Carlos Botelho, Azores Airlines’ managing director for Canada, calls “high-tech” Airbus A321neo aircraft, with plans calling for the airline to have four long-range A321neos by 2020.

Ricardo Madruga da Costa, Azores Airlines’ Toronto sales director, told the audience that the airline is “preparing a new incentive” plan for agents that is expected to be unveiled by the end of January. It’s expected to see Azores Airlines reintroduce override commissions, something it earlier discontinued.

“We want to work in the coming months to deepen our relationship with you,” he said.

There’s speculation that WestJet – an Azores Airlines’ interline partner – hopes to launch a Toronto-Azores’ route. Botelho said he wouldn’t be nervous about such a development, noting many Azores Airlines’ clients travel beyond the Azores to mainland Portugal, service WestJet apparently isn’t considering offering.

Botelho labelled the A321neo a “great plane” and said Azores’ Airline hopes to have year-round service from Toronto within a few years.

Antonio Teixeira, president of the SATA Group, parent company of Azores Airlines, used the event to tell agents he regretted the likes of cancellation of some flights in the past.

But he said travel agents should “look at the future and help us.”

Meanwhile, Tony Rodrigues of Bento’s Tours in Toronto said he’s welcoming the reintroduction of override commissions and the arrival of the A321neo, now in service.

He also noted passengers travelling beyond the Azores are allowed stopover stays in the islands without an added charge.

The airline uses the promotional slogan “2 Destinations For the Price of 1.”

Rodrigues praised the Azores’ natural side, saying they amount to a particularly scenic part of the world where visitors can enjoy the likes of whale-watching, diving and hiking in what he labelled “the Hawaii of Europe.”

Go to http://www.azoresairlines.pt for more.