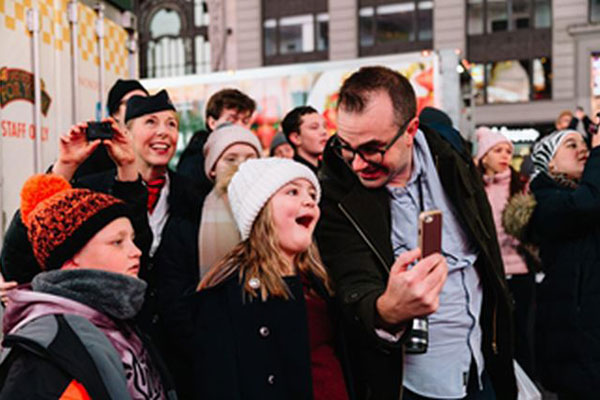 British Airways has created some extra special Christmas BA Magic for a group of deserving children, by taking them on the trip of a lifetime to New York City to “live like Kevin,” inspired by the adventures of Kevin in the festive family favourite, Home Alone 2.

“A Very Kevin Christmas” represents British Airways’ biggest and best BA Magic surprise so far and has been captured in two films showing New York in all its festive splendour. The first film is a movie-style teaser. The second, a longer chronicle of their adventure, includes interviews with parents revealing the inspiring and moving background stories of each of the young people in the group.

During the three-day trip, British Airways unveiled a variety of movie-esque experiences including a stay at the iconic Plaza Hotel, ice skating in Central Park, a visit to the Rockettes show at the Radio City Music Hall, toy shopping in the newly re-opened FAO Schwarz and an ice cream feast in the Plaza Hotel’s most exclusive and prestigious guest room, The Presidential Suite.

A medley of celebrity faces worked behind the scenes with the airline to announce the experiences to the four children, who were each nominated for the trip by those around them for their inspirational stories.

The star-studded cameos started at London’s Heathrow Terminal 5, where Pixie Lott revealed the trip destination during an intimate acoustic performance of “Walking in a Winter Wonderland.” They were then checked-in to at the British Airways desk by Harry Maguire and Maya Jama to fly in the specially re-branded “Kevin Class,” which saw the children and their parents given exclusive use of the Club World cabin on a Boeing 747.

More surprises were introduced by Stranger Things star, Millie Bobby Brown and Dr Who star, Jodi Whitaker, who had both recorded personal video messages to the children. The video from Jodi Whittaker was revealed to the children via the giant screen at One Times Square, and the famous ABC Supersign showed the children’s names and a “Happy Christmas” message from the team at British Airways.

The young group also had a personal meeting at the Plaza Hotel with the current President of the United States, played by Jon Culshaw.

The special trip kicked off #BAMAGIC100 which will see the airline thank its customers by surprising them with 100 acts of kindness (big and small), throughout its Centenary year.

Alex Cruz, British Airways’ chairman and CEO said, “New York is a magical destination to visit at Christmas whether you are a child or an adult, so it was the perfect place to stage our most ambitious BA Magic surprise yet. As our films reveal, the children have had to cope with very challenging circumstances and their stories are moving and inspiring in equal measure. We wanted to give them and their parents a magical start to Christmas they will never forget.

“As part of our centenary celebrations in 2019 we’ll also be launching BA Magic 100 when we’ll look forward to surprising many of our customers with special treats which will make their flying experience even more special.”

The movie style trailer as well as behind the scenes video of the children’s adventure can be found at https://www.britishairways.com/bamagic.