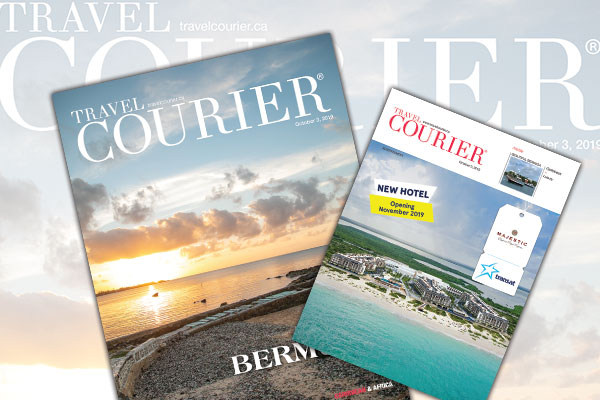 Pink sand beaches and turquoise waters mixed with a touch of British, North American and Caribbean cultures make Bermuda uniquely attractive to travellers from around the world, writes assistant editor, Greg Coates in this week’s issue of Travel Courier.

Discovered in 1505 by the Spanish, Bermuda was later colonized and settled by the English in 1612. The former capital, St. George, currently stands as one of the earliest English settlements of the New World. It is now recognized by UNESCO as a world heritage site. Hamilton has been the capital of Bermuda since 1815.

Bermuda offers a year-round temperate climate and is a manageable 21 square miles in size. And the good news for Canadians is that the island destination is only a 2.5-hour flight from Toronto.

Jill Dill, projects manager for the Bermuda Tourism Authority, said the island has seen a resurgence in tourism as of late, with numbers up double digits since 2015.

“The America’s Cup in 2017 really put us back on the map,” she said. “There are a wealth of experiences to be had here, and for Torontonians it’s just over two hours away. The misconception is that we’re in the Caribbean. We have Caribbean influences, but we’re very distinct and different. This is not your ordinary island.”

She added, “we’re a bit of Caribbean, a bit of British, a bit of North American. We offer a quaint island experience. There are so many nooks and crannies.”

Dill noted that the island “is like one big resort” and advises that visitors take the time to explore, but also be sure to make time to get to one of the many beaches. Horseshoe Bay Beach is the most famous, but Bermuda boasts beaches by the dozens. It’s quite common for visitors to even have a beach to themselves.

“It’s definitely an island to be explored, [and it’s] very safe,” she said.