A Better Way To Fly

Air New Zealand Celebrates A Decade Of Service To YVR 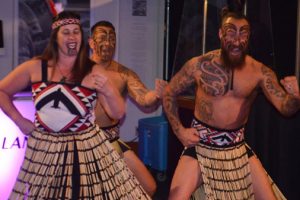 The recent celebrations marking a decade of services by Air New Zealand to Vancouver were given special context by the event location, and by the performers who took part, reports western editor, Ted Davis.

The gathering was staged at the Bill Reid Gallery of Northwest Coast Art, an ideal location for Sam George, an Elder from the Squamish Nation in North Vancouver, to welcome dignitaries and guests to the event. His performance echoed one by his grandfather, Chief Dan George.

That was followed by a performance by the Te Tini A Maui Kapa Haka group, which is based in Vancouver, but has Māori family roots in Aotearoa, New Zealand.

Speaking at the “A Better Way to Fly” event was Daniel Mellsop, the New Zealand High Commissioner to Canada; Craig Richmond, CEO of the Vancouver Airport Authority; and Liz Fraser, Air New Zealand regional general manager of the Americas.

While celebrating the 10-year anniversary, Fraser noted that the Vancouver-Auckland route had generated a year-on-year growth of 19%, and that capacity would be increasing by 20% this coming January.

She also highlighted the fact that Air New Zealand had just been crowned as the 2018 Airline of the Year, as chosen by international aviation website http://www.AirlineRatings.com.

This marks the fifth consecutive year that the airline received this award.