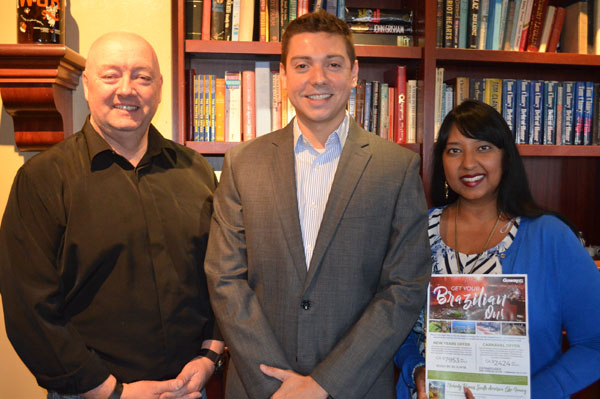 A big improvement in the processing of visas for visiting Brazil has resulted in a jump in visitor visa applications to the country, said a tour operator executive in Vancouver recently. A new electronic visa program has vastly reduced visa processing times, to an estimated approval period of 72 hours.

Since January 18th the new electronic visa fee is USD $40 plus a service fee of USD $4.24 — in Canadian dollars that would be approximately CAD $59. (Complete details are available by clicking here).

Visitor visa applications have jumped by about 47%, said Don Forster, the Latin America product manager for Goway. Inbound tourism to Brazil is expected to grow by up to 25% as a result of the eVisa. Forster was in Vancouver as part of a recent Goway event for travel agents at the Steamworks brew pub.

The three principal attractions that visitors target in Brazil are Rio de Janeiro, Iguazu Falls and the Amazon River, says Forster. But a region that is now getting some extra promotional attention is the Pantanal tropical wetland. It is rarely visited by mass market travellers but deserves consideration for itineraries, said Forster. He notes that the Pantanal is like the Okavango Delta in Africa in terms of sheer eco-diversity.

The Pantanal is defined as the world’s largest tropical wetland area, in western Brazil and spilling into Bolivia and Paraguay. It covers an area of between 140,000 and 195,000 sq. km., much of which is covered by water during the rainy seasons, helping nurture biodiversity and supporting a dense array of animal species. Amongst these are elusive jaguars, which are sought for rare sightings by tour operators in the region, who use canoes and horses for transportation, says Forster.

Iguazu Falls continues to be a major tourist draw for Brazil, with its status as the largest waterfall system in the world. But another spectre of tumbling water is Angel Falls, which is the tallest waterfall on the planet.

The falls are actually located in Venezuela, but an excursion to Angel Falls makes for a memorable tour option from Brazil. A program there typically lasts about six days, including three days to get in and out the remote jungle destination. While there, visitors will camp in the jungle, canoe on a river, swim at the base of the falls and can even book scenic flights.

And such a trip is safe, says Forster, noting that the current financial strife in Venezuela’s urban centres are having no impact on the tours to Angel Falls. Visitors can then add a check mark to “world’s tallest waterfalls” and “world’s largest waterfall system” on the same trip on their bucket lists, says the Goway executive.