Emerald Isle Continues To Post Gains Out Of Canada 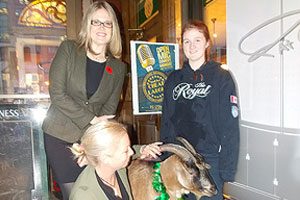 The event also included an update on all things Ireland, with Welch telling Press Today that 2015 had been a good year, with the Emerald Isle welcoming 190,000 Canadians – a 20% rise over the previous year.

As for 2016, Welch said that Tourism Ireland is “looking at double-digit growth” out of the Canadian market.

And Welch made it clear that the combination of Ireland’s many new attractions and the attention that it has been receiving as the setting for a number of major television shows (like Game of Thrones) and movies (like Star Wars) and the year-round air service that operates from Canada has certainly been driving its growth from this market.

Welch also told her audience that for the second year in a row, Tourism Ireland will be a sponsor of the Royal Agricultural Winter Fair that takes place in Toronto from Nov. 4-13.

Photo Caption: For the second year in a row, Tourism Ireland will be a sponsor of the Royal Agricultural Winter Fair and during a breakfast event in Toronto, Turbo, the Official Animal Ambassador for the Fair, was on hand to welcome the tourist board’s guests. Pictured (l-r) are Tourism Ireland’s Jocelyn Black (kneeling), Turbo, Dana Welch of Tourism Ireland and Zuri Barnes, Turbo’s handler.