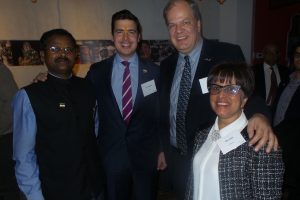 Brussels Airlines is preparing to act as a Canada-India bridge thanks to an imminent route that will enable the carrier to offer clients what it says may be viewed as the quintessential European destination en route.

The carrier, which falls under the banner of the Lufthansa Group, counts Toronto among its North American destinations, and Christophe Allard, the airline’s director for North America, told a March 22 Toronto event that the carrier wants to “connect with the Indian community” in this country.

“The India addition to our network is a very important one,” he told the gathering, co-hosted by India Tourism.

Brussels Airways decided to launch the Brussels-Mumbai route after India’s Jet Airways – which carried people between India and Brussels – relocated its operation from Belgium’s capital to Amsterdam.

Brussels Airlines codeshares with Air India, with Allard saying that looks attractive to those wanting to travel to Indian destinations beyond Mumbai.

The airline began operations in 2002 and last year carried a record 7.7 million passengers, short of the eight million it hoped for, but still a 3% increase over the previous year. The deadly terrorist attack in Brussels a year ago – which temporarily curtailed travel to and from the city – is seen as the reason the carrier didn’t reach the eight million figure.

A poignant moment during the Toronto evening came when Allard asked those in attendance to observe a moment’s silence for the victims of the attack.

Allard told PressToday that those travelling between Toronto and Mumbai with Brussels Airlines can enjoy a free stopover in Brussels, which he labelled the “capital of Europe” and which he said has distinctly European culture, cuisine and architecture. “It you go to Brussels for three days, you’ll have a decent idea of what Europe is all about.”

Anil Oraw of India Tourism in turn told the gathering that India tourism attributes include tiger reserves, 120 national parks, 7,000 miles of coastline, 5,000 years of history and “you’ll find yoga everywhere… India is the journey of a lifetime.”

Indian authorities have agreed to make the electronic tourist visas that are now good for 30-day visits by Canadians valid for 60 days, he continued.