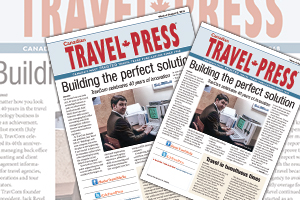 No matter how you look at it, 40 years in the travel technology business is quite an achievement.

As TravCom founder and president, Jack Revel tells it, “Building a software company was never the plan at the beginning. I just wanted to find a way to streamline airline ticket sales reporting by using the computers at my father’s travel agency.”

Now back in 1976, computer engineering was not a career path, so Revel combined his degree in electrical engineering with his travel agency experience, added his skills in accounting and ended up creating the first computer interface using an IBM desktop computer.

Considering that until then, weekly travel agency reports of airline ticket sales were done manually – which was not just time consuming, but also required the agency to submit its sales estimates and authorize a 6% overage allowance just in case there were errors in the total amount due – this was a remarkable achievement.

Revel observed, “I knew that this was an expense that could be better managed with better reporting. I fought to prove that my computer report was accurate, with the result that Revel Travel became the first agency to avoid these costly overage fees.”

And Revel continued, “What started as an in-house solution for Revel Travel, was soon highly sought after and before we knew it, I was taking my 25 pound ‘portable’ Compaq computer nationwide to demonstrate TravCom software to travel agencies.”

Today, TravCom is used in 55 countries worldwide and manages agencies with sales up to and over US$3-billion.

Here in Canada, TravCom has a long history and since the beginning, it has tailored its operations to meet the specific needs of the Canadian marketplace.

Mike Miocevich, general manager, Travcom Canada, explained that initially, Galileo had the rights to TravCom’s product, selling it as Galileo’s Back Office (GBO).

In fact, Miocevich joined Galileo Canada in 1996 as the product manager for GBO.

In 2003, Miocevich said that GBO was separated from Galileo and TravCom Canada was created.

“One of the main reasons why we did that was so that we could expand our market in Canada,” he said.

As GBO, Miocevich told Canadian Travel Press, TravCom’s product could only be sold to Galileo agencies and as a result, it was losing market share because it couldn’t be sold to Sabre or Amadeus agencies.

“We needed to stop the bleeding, so to speak, and open it up to all GDSs,” he said and that’s exactly what TravCom did.

And it did it by automating the tedious tasks of back office management – reconciliation, BSP reconciliation, commission statement reconciliation, car, hotel tracking and monitoring, etc. – and giving agency owners and managers back the time they needed to do what they loved – and that’s sell travel.