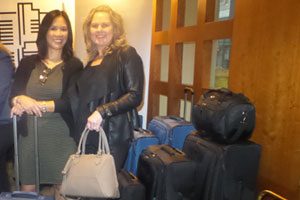 Our home and native land is clearly reflected on some of Atlantic’s new luggage.

The Holiday Group brand, which reaches out to families, is marking this 150th anniversary of Confederation in part by having created hard-shell luggage with exterior images of what Krista Haigh,

Atlantic Buffalo Plaid luggage comes in what Haigh said during a Thursday Toronto promotion is a distinctly Canadian pattern, while the Maple Leaf Collection features a prominent maple leaf image on its exterior.

The Canadiana Collection in turn has images that will quickly remind people of its home country; and the Canadian Winter Sports Collection sports the likes of hockey stick images.

The Holiday Group – which promotes itself as “Canada’s largest distributor and manufacturer of innovative and durable luggage” – also carries Travelpro – which has built a reputation based in part by it’s being the creator of Rollaboard wheeled luggage – and Swiss Gear luggage brands, with the latter being affiliated with the famed Genuine Swiss Army Knife. Spinner and two-wheel luggage are among Swiss Gear choices and all that brand’s designs have to be approved in Switzerland.

“They’re pretty extensive collections,” Haigh said. “We [The Holiday Group] have every size and shape. We have carry-on and check-in bags, your totes and garment bags.

Stores that carry The Holiday Group brands include The Bay, which Haigh said is the top seller of its Travelpro luggage.

Seen here at the Toronto event are The Holiday Group’s Elisa Wong and Carol Mattie.

Check it out at http://www.holiday.ca .