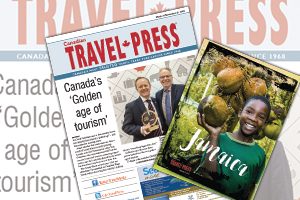 As David Goldstein sees it, this country’s tourism industry has entered a “golden age” – and that makes for exciting times.

Asked whether that excitement is a direct result of Lonely Planet recently picking Canada as its 2017 Destination of the Year, Goldstein, who is president and CEO of this country’s national tourism marketing organization, says he’s certainly pleased by the award, but that there’s much more to it than that.

The Lonely Planet award came “a bit out of the blue,” he admitted to Canadian Travel Press, before observing that what he’s talking about is “something bigger than this.”

To begin with, both the UNWTO and the OECD are tracking tourism to outpace global economic growth by double and that means that it’s a “good time to be in the business – it’s a competitive time, but it’s a good time.”

Goldstein also says it’s a golden age for tourism marketing, pointing out the ability that marketers now have to work with data to more precisely understand and target customers.

“Destination Canada has spent a lot of time and energy on this and we’re now seeing the results,” he says.

Destination Canada’s boss also believes that it’s a “golden age to be Canadian,” observing that “people are talking about us.”