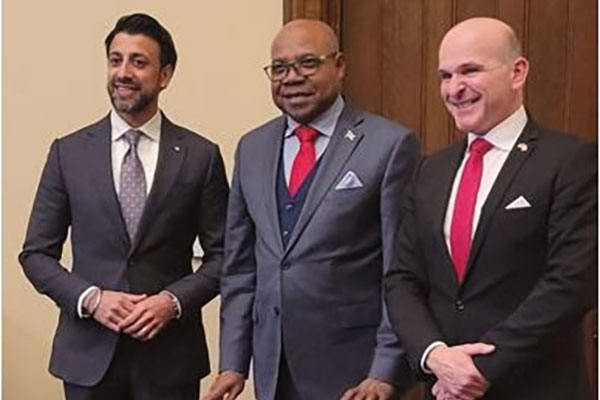 Canada and Jamaica have strengthened the two countries long-established relationship with a new agreement that will usher in a new era of cooperation and collaboration in tourism, resilience and sustainability.

Jamaica’s Minister of Tourism, Hon. Edmund Bartlett and his Canadian counterpart, Hon. Randy Boissonnault, agreed on a memorandum of understanding (MOU) when they met on Parliament Hill in Ottawa on Nov. 17, 2022.

Hon. Boissonnault is Canada’s first full-fledged Minister of Tourism but also holds the portfolio of Associate Minister of Finance. Two other key stakeholders in the Parliament Hill meeting were Jamaica’s High Commissioner to Canada, Her Excellency Sharon Miller and Canadian Parliamentary Secretary to the Minister of Foreign Affairs, Maninder Sidhu.

The two ministers agreed on an MOU to share best practices and build capacity in training and human capital development, marketing, investment and the expansion of tourism resilience and sustainability programs and projects.

Although tourism is Canada’s second largest export and growing, Minister Boissonnault said the industry was never seen as being critical. However, with a changing paradigm, it was now being pursued with new insights and a commitment made to funding and support for a meaningful MOU, recognizing the key role that Jamaica and Canada can play in strengthening global tourism.

The renewed partnership has been welcomed by Minister Bartlett who said Minister Boissonnault was a supporter of the new tourism that has been emerging since the onset of the COVID-19 pandemic and being the first full-fledged tourism minister for his country was an indication of how important tourism was now being seen.

Minister Bartlett elaborated on the MOU, stating that it will focus heavily on building the capacity of tourism workers and stakeholders of the industry “to provide a greater level of service, but more so to be able to pivot and to respond to different challenges and crises that may appear from time to time.”

An Employment Charter being developed to attract and retain tourism workers has received the backing of the Canadian tourism minister who indicated that he wanted to play an active role in the dialogue relating to the charter leading up to its promulgation at a later date.

Satellite centres of the GTRCMC are to be established at Carlton University in Ottawa, in addition to the one that already exists at George Brown University in Toronto.

The MOU also calls for exchanges to be initiated with Carlton University, George Brown College, and other key technical institutions that are tourism and hospitality oriented.

Minister Bartlett disclosed that Canada and Jamaica will collaborate on a number of initiatives he did not identify but stated that “This was a great encounter. Minister Boissonnault was so happy to meet and has committed full backing of our initiatives.”

Canada and Jamaica have enjoyed a longstanding relationship spanning over 60 years. Canada is also one of the preferred countries for settlement by migrating Jamaicans, with some 350,000 making it their home.