Canada Jetlines Ready For Take Off 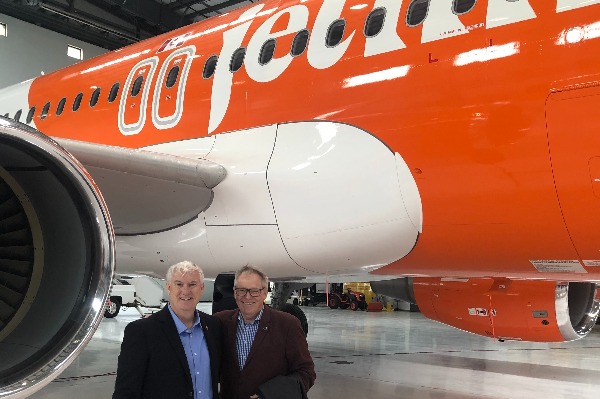 It was a big day for Canada Jetlines Operations Ltd. as it unveiled its first A320 aircraft to a group of potential investors, friends, family and travel industry partners – who included representatives from tourist boards, airports, travel agencies, hotels, and payment solution providers.

The private event took place at the Chartright Air Group Fixed Based Operation (FBO) facility at the Region of Waterloo International Airport (CYFK).

Guests at the event had the chance to have a look at the Recaro 3530 seat – a first for any Canadian air carrier — and an important feature of the Airbus A320 onboard experience.

The close to 200 attendees also had a chance to tour the airline’s first aircraft and meet the Canada Jetlines executive team and board of directors, who provided more insight on the carrier’s timeline towards take-off.

The team revealed progress towards an inaugural flight in July to destinations in Florida and the Caribbean.

Canada Jetlines CEO, Eddy Doyle said that: “We are thrilled to welcome guests to be able to see and touch the Canada Jetlines brand in person. As we are now in the final stages of the licensing process, we are closer than ever to taking to the skies and what to show the world what we have in store.”

Since the arrival of the aircraft in late February it has undergone painting and interior refurbishing. The aircraft livery represents fun and exciting times ahead for the airline as it gears up to welcome its first guests.

In the last little while, Canada Jetlines has certainly been busy.

Earlier this week, the all-Canadian, leisure airline announced that it was partnering with CheapOair, OneTravel, and CheapOair.CA as its first online travel agencies to provide access to the air carrier’s flights. 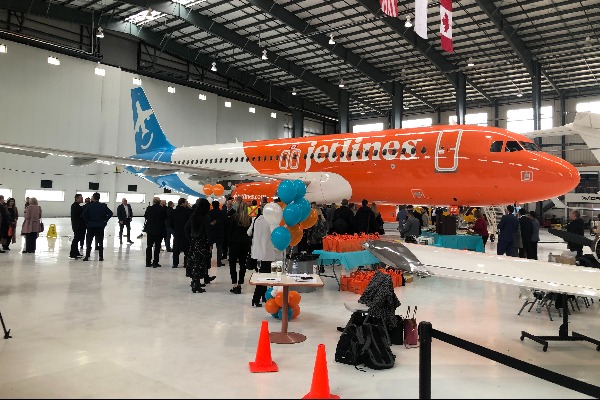 Canada Jetlines will begin flying in July of this year from their Toronto hub, with the aim of providing value to the traveling public.

In making that announcement, Eddy Doyle, CEO of Canada Jetlines, said that: “As we aim to offer the most convenient travel for the best value possible, Fareportal is the ideal partner to support the rapid growth and international expansion of our airline.”

As well, the carrier has now received Canadian ownership and control approval and the Stage 1 determination from the Canadian Transportation Agency (CTA). 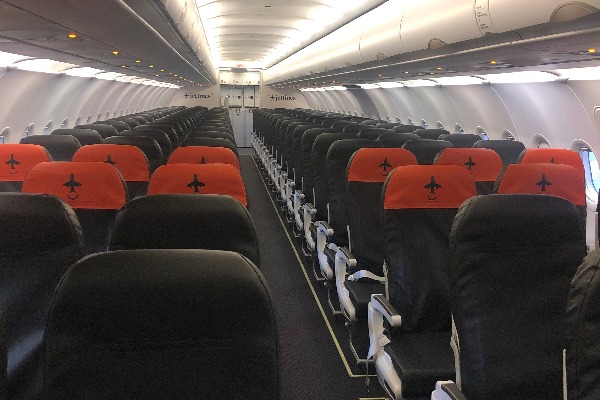 Canada Jetlines plans to provide Canadian consumers with more value choices and travel options and is targeting sun and leisure destinations in the U.S., Caribbean, and Mexico. It is also projecting that it will grow to 15 aircrafts by 2025.

For more, go to www.jetlines.com .

Seen in the main photo, from l to r, are Canada Jetlines CEO, Eddy Doyle with Raptor Superfan, Nav Bhatia

Seen here, from l to r, are Canada Jetlines’ Duncan Bureau with Baxter Media’s David McClung at the VIP event the carrier hosted at the Kitchener/Waterloo Airport on March 23.