Liberty Of The Seas Godmother Supports Communities In Mali And Bolivia 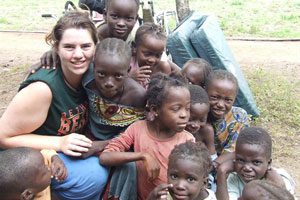 It’s safe to say that Donnalea Madeley’s ‘best day ever,’ may well be April 8, although she’s had some pretty good days.

In fact, the Travel Agent Next Door (TTAND) retailer was named godmother of the Royal Caribbean Liberty of the Seas in recognition of her philanthropic work, and on April 8, she’ll be hosting the annual fundraiser for her charity Hands Across the Nations.

The event, now in its 14th year, is the main fundraiser for the charity which helps communities in Mali in West Africa and Bolivia in South America.

In 2017, the Great Gourmet Give will once again comprise a cocktail reception, gourmet dinner with food stations hosted by some of Toronto?s finest chefs, a silent auction and dancing.

The auction will, as it has in past years, offer items for all budgets, including crafts from Bolivia and Mali, art, electronics – even an African Safari.

“HATN started as Donnalea and I saw a need in these forgotten communities,” said Greg Madeley, Donnalea’s husband and founder/director of the registered charity.

“We serve communities which are off the radar and provide them with a step up for a better future. We work with the leaders in the community and are very careful not to tell them what they need, but to listen and learn,” Madeley said.

Once the project – perhaps a school, a health clinic or a water well — has been established, HATN hands it over to the community and moves on to the next challenge.

Two achievements include the Health Care Centre built by HATN in Mali which now serves over 100 patients a week from seven villages; and in Bolivia the greenhouse projects allow communities in the Andes to grow vegetables year round.

And 2017 also marks a special anniversary in Donnalea’s life — it was 10 years ago this year that she was chosen as godmother of the Royal Caribbean Liberty of the Seas, voted by 15,000 consumers who were asked to select from a group of travel agents from around the world who had been nominated for their services to philanthropy.

This year’s Great Gourmet Give will be held at the Brighton Convention Centre in Toronto.

Tickets can be purchased at http://www.hatn.org and early booking is recommended as last year’s event was a sellout.