Canadian Outbound Travel By The Numbers 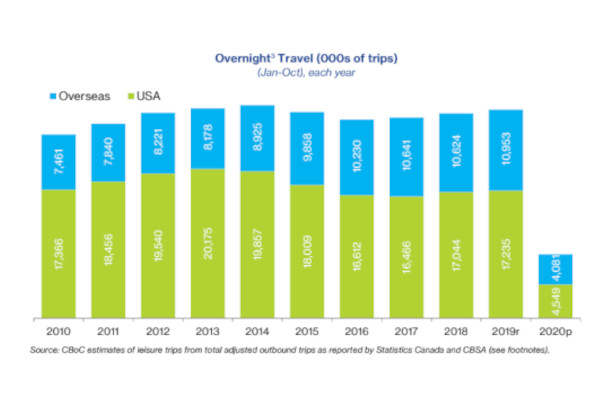 The update reports that there were 136,000 trips recorded in October, a 94% decline compared to the same period in 2019. Total overnight outbound trips are down 69% compared to the first ten months of 2019. Canadians have made just 8.6 million overnight trips to the U.S. and other destinations in 2020 versus 28.2 million last year. During the period, overseas activity has fallen 63% while transborder trips have decreased 74%.

Broken down by region, Outbound Canada reports the following:

Europe and the United Kingdom

There were 892,000 Canadian arrivals in European destinations throughout the first ten months of 2020, an 84.3% drop compared to 2019. Two-thirds of these trips occurred in the first quarter.

After the initial shutdown led to a 97% decline in arrivals in April and May, activity picked up slightly throughout the summer.

In fact, August recorded the best performance since the pandemic began though arrivals were still down 90 per cent.

However, activity started to wane again in October as the second wave took hold and restrictions and closures were re-introduced.

Asia, Oceania, and the South Pacific

So far, the pandemic has resulted in 2.3 million fewer arrivals in the region with China (down 90%), Hong Kong (down 90%), Macao (down 90%), and Taiwan (down 83%) recording the largest proportional declines.

Minimal travel activity since April has led to a 52% decline in trips to the Caribbean, Mexico, and Central America throughout the first 10 months of 2020. While more than 2.1 million arrivals from Canada were reported during the period, almost all of this activity took place in the first three months of the year.

Despite the second wave of COVID-19, consumer confidence was 85.8 points in December; the highest level recorded since March.

Compared to the previous month, confidence increased quite a bit in Atlantic Canada, Ontario, and BC, while little change was registered in the Prairies and Quebec recorded a decline.

Overall, 58% of Canadians expect their household finances to remain the same over the next six months. Moreover, just 21% think it is a good time to make a major purchase, compared to 28% one year ago.