Home › Airlines › Can’t We All Be Friends

Can’t We All Be Friends 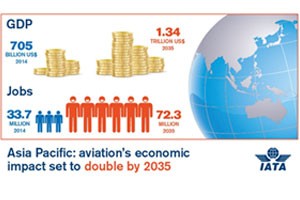 Partnerships among all stakeholders, including governments, to help aviation fulfill its important role as a catalyst for global economic growth and development are being welcomed by IATA.

IATA’s director general and CEO, Tony Tyler said that: “Airlines will transport 3.8 billion passengers and 53 million tonnes of air cargo this year. In doing so, they will support some $2.4 trillion in economic activity and some 58 million jobs. In Asia-Pacific, the corresponding numbers are over $700 billion in GDP and 33 million jobs. By 2034, global demand will reach 7 billion passengers, but that demand can only be accommodated through a working together approach by all aviation stakeholders including governments.”

Speaking at the Singapore Airshow Aviation Leadership Summit hosted by the Singapore Government, Experia Events and IATA, Tyler cited the collaborative event as an example of the working together approach.

“It’s great that we are looking at the challenges of future growth together with all stakeholders,” IATA’s boss noted.

And Tyler identified safety, sustainability and infrastructure development as three examples where partnerships are vital to meeting forecast demand for connectivity.

He said that many governments in the Asia-Pacific region value highly the economic contribution of connectivity enabled by aviation and work to sustain it.

However, Tyler cautioned that “it will be a challenge to keep up infrastructure development in line with growing demand – and to ensure that that skies can still operate efficiently as the industry grows. The Gulf hubs already face a similar challenge where much more coordination in airspace management is needed. Europe probably faces the greatest risk. Air traffic management is an expensive and disjointed mess as a result of governments’ protection of narrow domestic interests at the expense of Continental success. Moreover, a Eurocontrol study estimates that European airports could also face a capacity crunch—with a 12% shortfall against demand by 2035.”