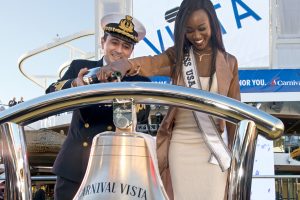 The event also included the ship’s official naming ceremony with Miss USA Deshauna Barber (pictured above) – the first woman serving in the US military to hold the title – presiding over the ceremonies as godmother and releasing the ceremonial bottle of champagne that smashed over the hull of the massive 133,500-ton ship.

Underwood performed an hour-long set for hundreds of military personnel and their families, and other special guests, many of whom were given the chance of a lifetime to meet the artist during various meet-and-greet opportunities during stops along her Storyteller Tour, and were invited to attend the festivities aboard Carnival Vista.

As the line’s newest ship, Carnival Vista introduced a number of groundbreaking innovations including the first brewery on a North American-based cruise ship, the first IMAX Theatre at sea, the most elaborate water park in the fleet highlighted by the 455-foot-long Kaleid-o-slide, a groundbreaking bike-ride-in-the-sky aerial attraction called SkyRide, and the new Family Harbor with specially designed staterooms for families, a family concierge and more. 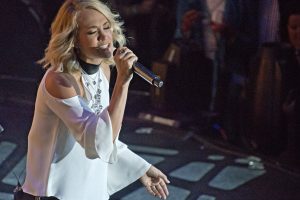