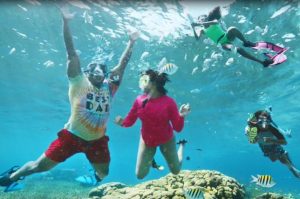 After much research, Anomaly discovered that the Carnival brand, guests and crew all share the common belief that “fun is a choice and whether on board or ashore, those vacationing with Carnival choose to be their truest self, embrace positivity and have fun with others.”
“As America’s cruise line, Carnival has always delivered on our brand promise of fun, memorable vacations at a great value,” said Carnival president Christine Duffy. “This new campaign promises to be an irresistible invitation for prospects to rethink their beliefs about cruising and consider Carnival as their next vacation.”

The Choose Fun campaign launches with two distinctly different sets of advertising. First, longer-length testimonials depict first-time cruisers who were initially reluctant to set sail, but were liberated on a Carnival cruise, making the vacation more fun and memorable for everyone. These testimonials are viewed in unexpected situations such as sliding down a water slide, posing for photos and even conversing with family members under water.

The three testimonials include: “Excursions,” “Stacy Tracy” and “Insta-worthy.”

Additionally, six-second video snippets will be customized to match content on various web sites and viewer preferences delivering the ultimate one-to-one marketing. Each pod showcases a fun activity aboard a Carnival ship including biking in the sky on SkyRide, getting a massage at the Cloud 9 Spa, performing at Lip Sync Battle, enjoying the Punchliner Comedy Club and feasting on burgers by Food Network star and Carnival partner Guy Fieri as well as fun activities ashore.

Choose Fun will come to life in digital display, paid social and modular online videos on platforms such as Amazon Video, Hulu, Roku and Vevo. The new advertising will also air on television in the Atlanta, Houston Dallas and LA markets during high profile events like the GRAMMY’s Red Carpet and NFL Playoff Games.