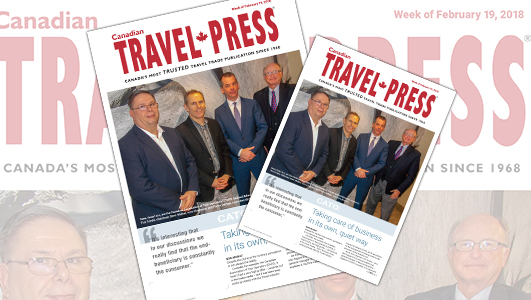 Despite the cliché to the contrary, perception is not always the reality.

Consider, for example, the Canadian Association of Tour Operators (CATO). It hasn’t had a very high profile – certainly not in the trade media – but it has been busy working closely with the Travel Industry Council of Ontario (TICO), ACTA and others on the changes that are being made to the province’s travel industry act, reports Bob Mowat in this week’s digital edition of Canadian Travel Press.

As its new chairman, Tim Croyle – who also happens to be vice-president and general manager of WestJet Vacations – explains it, CATO’s mandate “is to represent the tour operator industry within Canada and have a single voice either to the government here, in Canada as well as governments overseas in the destinations and jurisdictions that we serve.”

And he while he agrees that CATO may well have been quiet from a media perspective, that doesn’t mean it hasn’t been busy as it has spent the past two years working on the travel industry act – work that included consultations with the Ontario government and gathering feedback and input from all its members on the proposed changes.

Croyle also pointed to the good relationship that CATO and ACTA have, telling CTP that “all through the work we’ve done on the Travel Industry Act, we’ve shared our point of view and our concerns and I think we’ve presented a very united front between ourselves and ACTA to the government on what we believe is the right thing for the industry, because a healthy industry benefits all of the players.”

CATO’s chairman noted as well that: “I think we’ve had some good success in driving the direction of all of the changes to the Act.”

He told CTP that those changes are “built around increasing consumer protection, but also providing a better regulatory framework that is probably less burdensome for the industry, but ultimately ends up providing better protection for the consumers.”