Home › Cruise › Celebrity Goes Over The Edge With New Flagship

Celebrity Goes Over The Edge With New Flagship 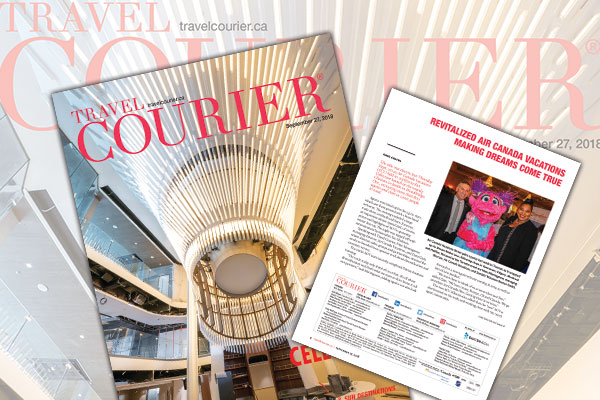 It’s described as “the most anticipated ship of the year,” and with good reason as Celebrity Cruises’ new flagship, Celebrity Edge, is sure to be a game-changer in the industry, reports assistant editor, Greg Coates in this week’s digital edition of Travel Courier.

The 2,918-passenger Celebrity Edge is currently getting its finishing touches at the Chantiers de l’Atlantique shipyard in France and will debut in late November, homeporting in Fort Lauderdale and offering Caribbean sailings before moving to the Mediterranean next summer.

Celebrity recently hosted a by-invitation-only industry sneak peek and tour of the Edge in France, attended by top travel trade personnel and journalists from around the world, including Travel Courier’s Greg Coates.

The ship certainly lived up to its billing. While about 95% complete at the time of the tour (and still a construction site), it was evident of the luxurious and unique experiences that lie ahead for Celebrity Edge cruisers.

The attention to detail is evident throughout the ship – thanks much to its team of world-class designers – and from all accounts from those on hand, the Edge is impressive.

“I’m amazed at the level of detail,” said Celebrity president Lisa Lutoff-Perlo, who admitted, while leading a tour of the ship, that her two favourite things are the ceilings and the staircases.

She later added that that’s the word for Edge, “beautiful.”

The Celebrity president also noted that while Celebrity Edge is certainly luxurious, it is at the same time “approachable and not pretentious.”