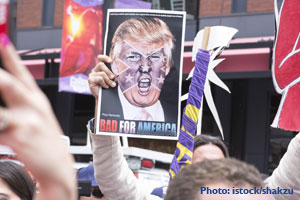 Donald Trump’s Jan. 27 executive order banning entry to the US to those travelling on passports from Iraq, Syria, Sudan, Iran, Somalia, Libya and Yemen for the next 90 days, has created chaos, confusion and condemnation in both the US and around the world.

Courts in four US states – Massachusetts, Virginia, Washington and New York – have already issued orders which prevent authorities from either detaining or deporting travellers from the seven named countries who have US visas, green cards or are refugees.

There have been angry demonstrations at major US airports in New York, Boston, Philadelphia, Seattle, Dallas and other US cities.

Here in Canada, federal government officials – who received no warning of the ban – spent the weekend scrambling to get clear on how Canadian permanent residents holding passports from those seven countries named in the order would be affected.

Canada has now been told that as long as those travellers have a valid Canadian permanent resident card and a passport from one of the countries, they’ll be allowed entry into the US.

Both Air Canada and WestJet moved quickly to respond to the changes.

Air Canada said that as a result of the new United States entry restrictions, it has implemented a policy for travellers from the named 7 countries who purchased an Air Canada ticket no later than Jan. 29, 2017.

Those travellers can contact Air Canada Reservations to change their flight, free of charge, to another date between now and Jan. 20, 2018, subject to availability in the cabin you originally purchased. Otherwise, any fare difference will apply.

As well, affected travellers can also choose to travel to an alternate destination. Any change fees will be waived; however, any fare difference will apply. It is also possible to request a refund or credit towards future travel.

As for WestJet, it said that it is temporarily waiving the change and cancellation fee for guests who are impacted by this travel advisory.

The carrier told passengers affected by the change to cancel their reservation and it will offer a refund for the full amount paid.

WestJet said that they can also change their destination, and pay any difference in fare. If their new itinerary costs less, WestJet will provide them with a travel bank credit for the difference.